Sometimes Cano Gets the Bear...

Share All sharing options for: Sometimes Cano Gets the Bear...

...And sometimes Cano gets you. A few hours after I suggested that "Robinson Cano, batting in [A-Rod's] place in the order, would almost certainly have driven in more runs," Rodriguez came up with a ninth-inning single against the normally impregnable Joakim Soria to keep the game alive. Cano followed by grounding out to end the contest, making for a disappointing ending to a contest that had 40 days and 40 nights of rain delays. 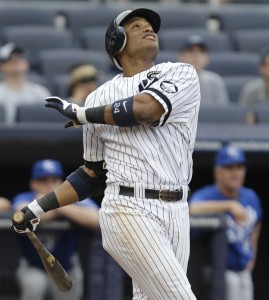 Runner on? Time to practice hitting in an elevator shaft (AP).

Still, my point stands, even if Cano sometimes wilts in pressure situations. This year, he's hitting only .234 with two outs and runners in scoring position. On the other hand, he's hitting .319/.407/.617 in "late and close" situations. These rates aren't too different from his career numbers. As a reader "The Dilemma" suggested in response to my original post, Cano's concentration seems to slip when he has to drive in runs. This is a point I made myself when Joe Girardi first floated the idea of batting him fifth--Cano is good at starting things, not so good at finishing them.

Last night's results and even the career record notwithstanding, I believe that he would have adjusted had he been required to hit cleanup. He's started seven games in the fourth spot this year and has hit well (.333/.419/.593), which doesn't prove anything, but I take it as a hopeful sign. He would either sink or swim in the spot, learning to focus... or I suppose he would stop hitting altogether, in which case the experiment would have ended quickly. Heck, the fourth spot quite often leads of the second inning, so he would have still gotten his chance at low-pressure hitting. I think it more likely, though, that natural talent would win out over time.

That said, in the future I should remember to hold these arguments for a time when Cano is not going through a slump-y period. Cano finished July with three home runs in the last four games of the month, but has hit .244 with no home runs in 12 August games.

Last note, non-Cano division: combine a shaky Dustin Moseley start and an Andy Pettitte setback and I am again forced to wonder how the Yankees were outbid on Dan Haren. In fairness to Brian Cashman, we don't know if they were even given that chance. As for Cliff Lee, that seems to have been out of the Yankees' hands. Jack Zduriencik got to choose between Jesus Montero and Justin Smoak . History will judge him harshly if he made the wrong choice. It's premature to judge, but the results are one-sided so far, with Montero getting crazy hot of late and Smoak, having played his way back to the minors after hitting .159 in Seattle, hitting .182 at Tacoma. But I digress. Watching Haren go to Anaheim for so little was frustrating, last night's game was frustrating--the Yankees tagged a number of balls but had little to show for it. Combine the loss with the rain delays and you had a long drive for a short day at the beach.