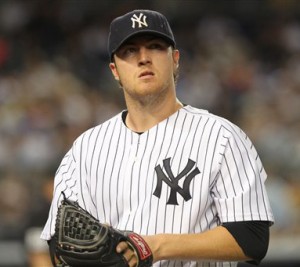 Sabermetrics, as defined by Bill James, is the search for objective knowledge about baseball. The willingness to keep digging for answers is essential to that quest, even if those answers contradict what you think you already know. So it is with a couple of my assertions about Phil Hughes from my previous post. Thanks to a nifty site called Joe Lefkowitz's Pitch f/x Tool, to which I was helpfully pointed by another regular Joe, River Avenue Blues' Joe Pawlikowski, I now know a bit more than I did a couple of days ago, and I'd be remiss if I didn't share it, particularly with Hughes set to face the Royals this evening in Kansas City.

For starters, my supposition that Hughes' home run spike is the result of hanging curves? Dead wrong. Crushed like a 450-foot homer, in fact. Hughes has yielded just one dinger on a curveball this year, compared to 10 on his four-seam fastball, and five on his cut fastball. Expressing the homers he's allowed as a percentage of pitches thrown, and dividing his season into the 13 starts before his turn was skipped (i.e., through June 19) and the eight after that:

The homer frequency of Hughes' three main pitches has gone up markedly, which is troubling. It starts to make a bit more sense when we examine the groundball rate splits of those pitches, which go against another assumption that I made. Remember, groundballs never turn into homers except for the rare inside-the-park job, usually triggered by some mischief like a man-eating tiger devouring a third baseman. Meanwhile, a fairly predictable percentage of fly balls do go out given large enough samples, something anyone can intuit from watching about two minutes of Kyle Farnsworth pitch. Anyway:

Contrary to my previous assertion, Hughes' curve has been his most consistent means of generating grounders, far moreso than the cutter. His switch to the curve as his secondary pitch may represent an effort to allow him to pitch to contact more often (thus preserving his pitch count, but lowering his strikeout rate) and to keep the ball on the ground. But that still leaves two problems: first, the curve's effectiveness at generating grounders has diminished greatly during his times of woe; and second, he only gets swinging strikes or fouls on 14 percent of his curves, compared to about 37 percent on the other two pitches. He's more likely to fall behind in the count with the hook, which doesn't help matters any.

The other thing worth noting is that Hughes' approach against righties and lefties differs more than I had realized. Start with the overall picture: Hughes has dominated righty hitters this year, holding them to a .238/.273/.325 line with just three homers in 253 plate appearances. Lefties, who comprise 52 percent of the batters he faced, have fared much better, hitting .253/.320/.453 with 13 homers in 273 PA. Against righties, Hughes has become more reliant on his four-seamer in the later sample, though the cutter is still his preferred secondary pitch. Against lefties, his curve has supplanted the cutter as his preferred secondary pitch. Additionally, his nearly-MIA changeup is used exclusively against lefties; he hasn't thrown a single one to righties.

The other thing to note about Hughes' splits is that he's fared much better on the road (2.61 ERA, with one homer allowed in 51.2 innings) than at home (4.79 ERA with 15 homers allowed in 77 innings). Fifteen to one! That Hughes' home run rate would be higher at home isn't itself surprising; NuYankee Stadium has seen 1.35 homers per team per game this year, more than any other venue save Toronto's Rogers Centre (1.42). Relative to the MLB-wide 8.8 percent drop in homers per game this year (itself a story for another day), that's about the same as NuYankee Stadium saw last year, 43 percent more homers than average.

KC's Kauffman Stadium, on the other hand, is playing host to just 0.8 homers per team per game this year, 24th in the majors and 16 percent below average. Couple that with the fact that Billy Butler's game-winning homer on Friday night made him just the third Royal to homer this month and it's reasonable to hope that Hughes might put together a good outing.