Welcome to the all-new Pinstriped Bible

Share All sharing options for: Welcome to the all-new Pinstriped Bible

GRAND REOPENING—KNOW-IT-ALL COMMENTARY 50 PERCENT OFF AT ALL STORES
Since last week, ye old Pinstriped Bible host has hinted at a new world dawning here at the web site. We have finally arrived at the day when we can talk about the changes we have planned. I just looked back at the very first Pinstriped Bible. I introduced this feature with—no surprise—a long quote from Casey Stengel. This time, I think it more appropriate to start off Volume II with a shorter Stengelism: "The trick," said number 37, "is to grow up without growing old."

I have certainly grown up in my years of writing the PB. When I began, I was in my 20s, had been married about a year, and my first child was still more than a year away. Eleven years later, I have, to paraphrase George Washington, grown not only gray, but almost blind in the service of my website. Yet, in getting to go to work each day in this most wonderful of jobs, writing about the great game of baseball and the illustrious, ever-expanding history of the New York Yankees, not to mention all of the diverse topics you readers have engaged me on over the years, and growing up without growing old has been no problem at all.

Part of maintaining one’s youth is embracing change; as Bob Dylan sang, he not busy being born is busy dying. Thus, for the first time in the long history of these rants and remonstrations, I’ve brought some friends to the party. As explained in this brief video, I am pleased to announce that two of the best baseball writer-analysts I know, Cliff Corcoran and Jay Jaffe, are joining the Pinstriped Bible team. Both have been writing about baseball, and the Yankees in particular, for nearly as long as I have, and both possess the combination of objectivity, insight, and humor that will fit right in here. We will also be joined by aspiring prospect maven Stephani Bee, a Baseball Prospectus acolyte, who will give us frequent updates on the goings-on in the Yankees farm system. As Yogi Berra once said, we have deep depth.

So for long-time and new readers, what do these changes mean? Here’s the short list:

• A new look to the site.
• More frequent updates, featuring Cliff, Jay, Steph, and myself. No more one-a-day and out.
• More added features like video and audio podcasts, ballpark reporting, and the like.
• No more registration for commenting. Community has always been a big part of the PB, and we’d very much like to get back to that. As long as we can keep the spam to a minimum, we’ll try to keep things nice and open.
• Every Tuesday: open bowling and discussion group. 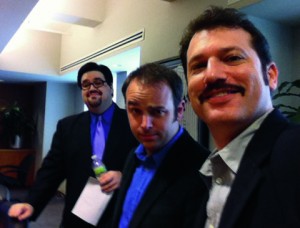 We’re still working on that last one. In the meantime, the Pinstriped Bible will remain a year-‘round feature, covering baseball through the regular season, postseason, and the winter carnival of awards, trades, and free agent signings, keeping our focus on the Yankees. And since Cliff and Jay have widely varied interests and compelling things to say on many topics, no doubt we will be indulging in the traditionally digressive explorations that have often accompanied our baseball talk, be it an argument over the worst Beatles song, the best Hitchcock film, or Jay’s guide to the best places to grab a taco in Brooklyn.

I’m very excited about this new direction we’re taking. The Pinstriped Bible has always been my private playground, but I’m more than happy to share my toys with such talented and committed writers. I hope you will join me in making them welcome here at the PB.

MEANWHILE, BACK AT RANGERS RANCH…
In conversation with my new companions prior to the taping of the aforementioned video, I was expressing my disbelief at the Angels’ lineup for last Sunday. Here it is:

Had  I known that due to Mark Teixeira’s visit from the stork, Robinson Cano’s cold, Jorge Posada’s sore shoulder, and C.J. Wilson’s left-handedness the Yankees were going to field this lineup—

—I might have held my tongue. Going into this abbreviated series, one looked forward to a potential playoff preview. We didn’t get that in the first of the two games. We got something like a Yankees “B” squad against the Rangers’ “A” team. Wednesday's lineup didn't have that "as attractive as a shaved ape" vibe for it thanks to the return of Cano and Posada (Teixeira still recovering from his fatherhood event and Granderson going into the shop for a complete overhaul), but lo, Javier Vazquez stumbled. Things looked bleak as the Yankees headed to the ninth trailing 6-5, but they were able to overcome closer Neftali Feliz with a sequence that began with a walk, a bloop single, and another single that seemed to have eyes.

This turnabout was incredibly similar to the chain of events that had undone Mariano Rivera the night before. When batters stage rallies on weakly hit balls in play, that's not hitting, but rather luck. It's like Stengel said after Bill Virdon's bad-hop grounder clobbered Tony Kubek in the throat in the seventh game of the 1960 World Series, a random occurrence that turned a double-play grounder into the key to a five-run rally: "Maybe God can do something about such a play; man cannot." When Derek Jeter hit a rounder that takes 17 hops and a right turn to get through the infield, you've entered the country from which Stengel was speaking. When Jeter can't throw out a runner on a ball that's just a bit too far into the hole, as happened the night before, you're in the same place. And when Mariano Rivera allows a leadoff triple but strands the runner despite letting all of the following three hitters put the ball in play... Yup, you guessed it, back in the Twilight Zone we go.

So was this a playoff preview after all? The intensity was surely there, but the outcomes were random. These clubs may well meet again, but they're not going to have another two games like the ones that we saw over the last two days. If they somehow do, someone is playing with the laws of probability. Einstein's god didn't play dice with the universe, but maybe Stengel's god, the god of baseball, has no more favorite pastime than requiring us to expect the unexpected.

DISCONTENTS CONTINUED
In the 10 games entering Wednesday night's contest, the Yankees’ pitching staff had done its job, allowing just 40 runs. Unfortunately, the offense had only been able to score 37. The Yankees were pounding the ball as recently as last month, so things should change, perhaps as soon as when they get to Kansas City. What’s less clear, and this makes that “should change” more uncertain, is which players are going to be the agents of that change. Curtis Granderson's we-can-rebuild-him Six-Million-Dollar Man moment comes none too soon, and just maybe too late: his struggles are now almost a year old. Hitting .258/.342/.472 last July 31, he shut things down, hitting just .234/.300/.421 over the final two months. His current .239/.306/.415 doesn’t look too different, so maybe this is who he is now.

Brett Gardner is (I believe) hurt. Jorge Posada is old and hurt. Actually, just about everyone except Nick Swisher and Mark Teixeira is some combination of old and hurt. Derek Jeter is showing a little life lately, but sometimes the old do suddenly stop hitting and can’t turn it on again. Heck, I’m still waiting for Don Mattingly to get over that back injury and start hitting .345 again. I’ll be waiting the rest of my life.

But let’s not get carried away. Whoa there. Chances are, this team-wide slump is only transient and the rockets will again be launched with regularity starting any day. This is just speculation, fun/nervous speculation, because we can make educated guesses about where things are going, but until they actually resolve we don’t really know.

WE PAUSE HERE TO CREDIT JOE GIRARDI
He got Mariano Rivera into a tie game on the road, breaking with a thousand years of pointless managerial orthodoxy. It didn’t work out due to a few relatively weak grounders that went exactly where they had to go, but it was the right call. We can only hope that he doesn’t swear off such audacious maneuvers due to the bad outcome. And as long as we're giving credit for things, consider that in the two games in Texas, the bullpen allowed just one run in seven innings. That's something considering it wasn't too long ago that Chan Ho Park was on this staff.

AND FINALLY
If you have any questions or comments about our new approach or just want to share chocolate chip cookie recipes, please feel free to write to stevengoldman@pinstripedbible.com.