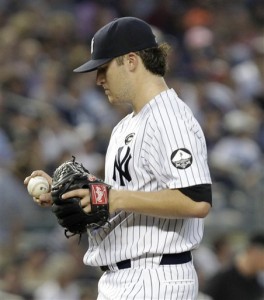 At the time of the Cliff Lee near-trade in early July, the Yankees' rotation looked like an area less in need of upgrade than, say, the bullpen or the bench. Since the All-Star break and Andy Pettitte's injury, however, the cracks have become apparent, again reasserting the old adage, "You can never be too rich, too thin, or have too much bacon. Or pitching." A.J. Burnett, Javier Vazquez and Phil Hughes have combined for just five quality starts out of 15 since the break, with a 5.58 ERA and a cholesterol-laden side of nearly two homers allowed per nine innings.

As aggravating as their ups and downs may be on a game-by-game basis — and brother, sometimes they induce the spontaneous flight of objects towards my television set — the track records of Burnett and Vazquez suggest they’ll snap out of their funks sooner or later. It's more dismaying to see Hughes running with that crowd of flakes, particularly since he started the season on such a high note. While one can pick a few different dividing lines which show the two Hugheses, it makes the most sense analytically to split his season at the point where the Yankees chose to skip his turn in late June in an effort to manage his overall workload and stay under his innings cap.

Now, this isn’t to argue that the Yankees shouldn’t have skipped his turn, or that young pitchers today are overly coddled or any of that; we’ll exhume that well-beaten horse another day. Instead, let’s dig into the numbers:

On both sides of the line, Hughes has received virtually identical defensive support from his teammates, above-average support at that, given that the league batting average on balls in play is .294. He’s got two main problems: he isn't striking out hitters at nearly the same clip as early in the year, and his home run rate has more than doubled. The latter is a byproduct of him generating fewer groundballs (which don’t go for homers) and getting a bit more bad luck on his increased number of fly balls (which do, given enough of ‘em).

Digging into the Pitch f/x data at TexasLeaguers.com yields a few subtle clues, albeit with a couple of caveats. First, the data on pitch types is derived from algorithms to identify the nature of each pitch (four-seam fastball, two-seam fastball, cut fastball, curveball, slider, changeup, knuckleball) by its velocity and break based upon feeds from MLB Advanced Media, and it isn't perfect. Second, we're dealing with relatively small sample sizes here, where minute changes can be overblown. But having pored over the data, here's what I take from the two samples, through June 19 and since then.

• Hughes' velocity is virtually unchanged between the two samples. He isn't actually getting fewer swings and misses in his more recent stretch, which is what you might expect given his plunging strikeout rate; it's nine percent in both batches. However, he is getting significantly fewer foul balls, dropping from 25 percent to under 21 percent. Fouls aren't as sexy as swings and misses, but they help a great deal. Sixty-four percent* of them turn into strikes (the rest happen with two-strike counts), and none of them ever drop for hits.

*As an aside, this was not a piece of data which was readily available, though you’d think it would be in this day and age. Fortunately, my Baseball Prospectus colleague, Colin Wyers, came to the rescue with a figure based upon 2003-2009 data.

• Hughes is relying on his four-seam fastball — the heater, designed to generate swings and misses — at about the same clip (56.4 percent to 55.5 percent). He's getting strikes via whiffs and fouls slightly less often when he throws them (36 percent to 37 percent) — not a big difference, but not a positive one, either. Eighteen percent of his four-seamers are being put into play, up from 16 percent, and while that doesn’t seem like a big deal, that’s more balls that have a chance to drop for hits every time out.

• His use of the cut fastball — the pitch he learned from Mariano Rivera, generally held as the secret of his breakthrough last year as a reliever — has dropped dramatically, from 23 percent to 17 percent, and he's generating fewer strikes with it (36 percent to 38 percent). Again, that means a slightly higher rate of balls going into play, where trouble can happen.

• His use of the curveball has risen from 14 to 19 percent to fill that gap. Here’s the problem: Hughes gets very few strikes with the curve. Prior to sitting out a turn, just 16 percent of those curves were going for whiffs or fouls; now that’s dropped to 12 percent. Again, more balls are going into play.

So basically, Hughes has switched from the cutter to the curve as his number two pitch, resulting in more contact and fewer whiffs or fouls. I’ll wager that many of those homers came off hanging curves, and that most of the cutters which hitters make contact with are hit as grounders, but I don’t have the processing power at my immediate disposal to confirm that. What I do know is that based upon the Pitch f/x data at Fangraphs, which is presented differently than at the TexasLeaguers site, but comes with similar caveats, Hughes’ curveball has been a net negative in terms of runs this year, while his cutter has been a net positive.

Missing from all of this is the vaunted changeup which was the talk of spring training and the so-called key to Hughes winning the fifth starter job over Joba Chamberlain and (guffaw) Sergio Mitre. Hughes threw the pitch just 1.5 percent of the time during his good stretch, and while he’s essentially doubled that to 2.8 percent during the bad stretch, that only comes out to about three changeups on a typical night. He’s thrown less than one-third of those pitches for strikes, too. So the question is, what was it about this pitch which so impressed the Yankee brass in the spring, and where has it gone? This is the kind of thing you’d hope a pitching coach would help Hughes sort out, but it must be pretty low on Dave Eiland’s to-do list. That list seems to grow with each day to the point where one wants to ask him that immortal question from Office Space: "What would you say you do here?"