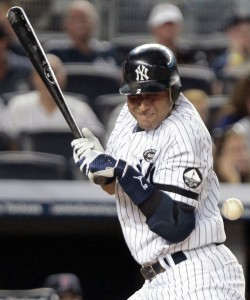 Derek Jeter is a career .315 hitter. He’s currently hitting .280. If he wants to finish the season at .315, or even .300, how hot does he have to be to over the rest of the season? We can take an educated guess at the answer. The Captain has averaged 4.25 at-bats a game this year. The Yankees have 49 games remaining. Assuming nothing changes dramatically, like an injury or Joe Girardi dropping Jeter to the ninth spot so Francisco Cervelli can bat leadoff (this would indicate that Girardi has suffered a serious brain injury and should seek immediate medical help), Jeter should have something like 208 more at-bats this year.

The latter isn’t impossible, but it certainly seems unlikely. The .346 mark seems more achievable. Note that as hot as he’s been of late, Jeter is hitting only .341 in August, so he would actually have to step things up a tiny bit to avoid recording just the fourth sub-.300 season of his career. If he does manage the feat, it will be an amazing accomplishment given that he hit just .258/332/.350 in 80 games from May through July. That’s half a season of peddling backwards from that theoretical big "The Hunt for 3,000" contract.