Crushing on the Minors

Share All sharing options for: Crushing on the Minors

Though the minor-league seasons are rapidly approaching an end, there’s no reason we can’t delve into the numbers and see how some of the Yankees’ farmhands are shaping up in the final weeks. Here’s a quick look at some players who have been making noise or floundering lately. 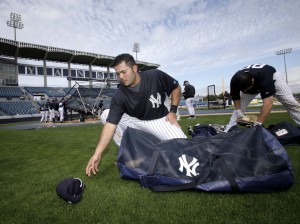 • Jesus Montero, C, Triple-A Scranton: What more can be said about the kid? Montero is easily one of the Yankees’ best hitting prospects in years, and after an awful first two months at Triple-A (he hit .247/.313/.384 and .214/.302/.333 in April and May, respectively), the gears have kicked into overdrive in July and August, as he has pulverized opposing pitchers to the tune of a .391/.477/.713 line. A small sample size in August gives a hugely positive skew to that line, but that’s not a knock on what he has accomplished. His average, which was hovering just above the Mendoza line in early June, has skyrocketed to .287, and his slugging percentage, which didn’t even scratch the .360s until June, is looking much more attractive at .495. The last 10 games have been especially kind to Montero, with a .447/.512/.816 line that includes three homers, five doubles, and five walks in 38 at-bats. The Yankees will likely hold off adding him to the 40-man roster until he next year due to spot scarcity, but if he continues to play monster masher in Scranton, he could earn a cup o’ joe in September.

• Melky Mesa, CF, High-A Tampa: Named a player to watch by Kevin Goldstein and the 18th-best prospect in the Yankees’ system by Baseball America in the preseason, Mesa, like Montero, had two months of putrid output (he hit .223/.303/.345 in April and May combined), but since then, he has been cranking out hits on a regular basis. His slash stats are now hanging at .269/.339/.482, and he’s starting to showcase why Baseball America said he "could be the system’s top five-tool player," as he has 17 homers, six triples, and 21 two-baggers in 390 ABs. Mesa’s hot streak moved from "simmering" to "scorching" as the calendar flipped from July to August; he has brought the thunder with a .311/.354/.578 line since August 1 with three homers and three doubles. In that time, he has struck out 12 times and also swiped two bags while getting caught once, so while he has been making contact and getting on base, he’ll also need to work on picking his spots to run and curbing his strikeout rates. Mesa is a bit old for playing in High-A, so he could just be crushing the weaker competition, or he could finally be putting together the sort of campaign the Yankees were bargaining for when they signed him out of the Dominican Republic in 2003.

• JR Murphy, C, Low-A Charleston: The Yankees’ second-round pick last season who came into the year ranked the eighth-best prospect in the system by Baseball America and the ninth-best prospect by Goldstein, Murphy started out his first full season of pro ball in extended spring training before getting shipped to Low-A Charleston. He has put together a relatively solid campaign as one of the younger players in the league with rates at .257/.310/.372. Though he will certainly need to work on getting on base at a much higher clip to prove useful in the major leagues, he’s also very far away and has time on his side to make the needed adjustments. Murphy’s last 10 games have shown a flash of why the Yankees drafted him much higher than other teams expected him to go, as he has thumped out a .359/.409/.590 triple slash with two bombs and, perhaps even more encouraging, four walks to six strikeouts.

• Slade Heathcott, CF, Low-A Charleston: Originally expected to spend some time in the Gulf Coast League, Heathcott, the Yankees’ first-round pick from the 2009 draft, was instead shipped to Charleston with Murphy. He proved capable of handling the tougher pitching in June with a .267/.350/.322 line, so the Yankees left him there for the remainder of the season. Heathcott battled bicep tendonitis in mid-July, and his hitting has tapered off completely in August, as he is hitting a thumpless .143/.326/.200 in his last 10 games. There are a couple of factors that could be in play here. One, pitchers could be making adjustments to the youngster. Second, he could be feeling lingering problems with his biceps, especially since his slugging is lagging. Third, it could be a good old-fashioned case of not hitting. (I will forego saying, "slump," with a tip of the cap to Yogi Berra.) Regardless, he has still performed above expectations and is loaded with tools, so there is a lot to salivate over.

• Hector Noesi, RHP, Double-A Trenton: I know. Noesi only gave up one earned run in five innings on Tuesday. Why, then, has he made the not-so-hot list? Take a gander at his hits allowed column and you may see my point—he allowed 10 hits in those five innings and one walk. Unless your name happens to be Daisuke Matsuzaka and you have the magical ability to worm your way out of jams on a semi-regular basis, the Houdini act is unlikely to play well in the majors. True, Noesi has been solid for the majority of the season and earned himself a spot in the Futures Game, but his numbers over his last four starts have not been as appealing. In 16.2 innings, he has allowed 32 hits and 20 runs. He has surpassed the number of innings he pitched last season (117.0 last season and 128.2 so far this season), so fatigue could be a factor in his recent performance, but it could also be the league adjusting to a guy whose fastball usually tops out around 92.

• Eduardo Nunez, SS, Triple-A Scranton: After a huge year at Double-A in 2009 (.322/.349/.433), Nunez had hit relatively well for a middle infielder at Triple-A (.287/.339/.383). However, a slump (sorry, Yogi) that started in late July has extended into August. Over his last 10 games, Nunez’s slash stats look anemic at .125/.163/.250 with three extra-base hits and two walks (both came last night). He’s a free swinger who makes consistent contact, as evidenced by only 59 strikeouts in 446 ABs, and has good speed (21 stolen bases and five caught stealing), but he also has shoddy defense in the middle infield, with 14 errors collected on the season while primarily playing shortstop.