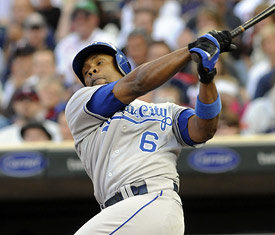 Now we can start.

Over in the New York Post, the impressively grizzled reporter George King writes that the Yankees are "eyeing" Jose Guillen, designated for assignment yesterday by the rebuilding Royals. King writes:

With switch-hitting Berkman struggling against lefties it's likely he will DH against right-handed pitchers. That leaves Marcus Thames and Kearns from the right side and the question the Yankees have to ask themselves is Guillen better than either one of them because the hamstring problem has turned him into a DH.

If Guillen isn’t going to play the field, then the question for the Yankees is not whether he’s better than Austin Kearns, who gets to wear a glove, but if he’s better than Marcus Thames at hitting left-handers. The short answer is, almost certainly not, and not just because of the poor hitting mentioned above. Thames is a career .263/.336/.509 hitter against left-handers, and he’s hitting .328/.412/.431 against them this year, albeit in very limited playing time. I’m less concerned about small sample sizes with Thames and left-handers, because even if the batting average is up and the power a bit down, he’s still doing something that is consistent with his overall abilities.

Guillen is a career .271/.328/.461 hitter against left-handed pitching, but we shouldn’t care too much about the career numbers because the old man has not only been around forever, but was rushed to the Majors by the Pirates and really didn’t do anything useful until he was 27. Guillen hit .260/.305/.398 in his first 600-plus games in the bigs and then started to figure things out. What we want to ask is, if Guillen’s 2009-2010 results against lefties are some kind of injury-inflected fluke, (1) is he ready to recover and do what needs doing, and (2) what did he do over a more relevant time-span, say the last five years?

The answer to (1) is pretty easy: there is no real reason to think he’s going to suddenly wake up upon arrival in New York—no physical reason, anyway. Guillen’s reputation for anti-professional behavior is pretty strong, and while he might get psyched with something to play for, he’s famously sulky when he doesn’t play. As a platoon guy against left-handers, he’s going to sit often enough that there’s going to be a black cloud over his part of the clubhouse. You don’t really need that. Nor do you need the attitude that my BP colleague Rany Jazayerli described on his respected Royals blog:

The following day, as the trading deadline passed and every other member of the team was in uniform in preparation for the game, Guillen alone sat at his locker with his jeans still on, and only after it was clear that he hadn’t been traded did he grudgingly decide to get dressed. You don’t have to be Einstein to understand the implication.

As for (2), he was a bit better than Thames. From 2004 to 2008, Guillen hit .287/.349/.510 against left-handers. Is that so much better that the Yankees would want to cut bait on Thames, who has done his job all year long, and then endure Guillen’s cheerful comportment for the next eight weeks? In real terms, it is not. Again, given the player’s recent performance, injuries, and age, a bounce-back seems unlikely… So, why are we even taking about this?

THE NEW PINSTRIPED BIBLE IS COMING NEXT WEEK
Stay tuned for details! 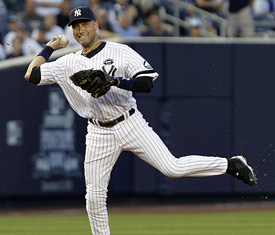 TO THE MATS WITH READER COMMENTS
A quickie as we wait for the Red Sox and the Yankees to take the field and possibly settle Boston’s hash for 2010. Reader “Nevada Yank” thinks I was trashing on Derek Jeter yesterday, though that was far from the case. It’s a long note, so I’ll break it up and jump in here and there. You can see the full comment here.

Considering Steve again rants about Jeter's abilities after 5 yrs of reading him, I would suggest Steve focus on the middle of the Yankee order which until recently with Tex's rejuvenate has been a negative almost year long. How is it that you expect Jeter to get good pitches when Tex and Arod until recently have been targets for pitchers to get outs. Why pitch to Jeter and Cano when you can avoid them by pitching to Tex, Arod, Posada and Granderson.

I appreciate your taking the time to comment, Nevada Yank, but this is just illogical. If Jeter isn’t getting good pitches, isn’t being pitched to, as you say, then why is his walk rate way down? Shouldn’t he be taking those bad pitches, as he has done previously? Instead, he’s gone fishing. If Jeter were really being pitched around, his OBP would be higher, not lower. Besides, as I suggested yesterday, the kind of lineup synergies you suggest either don’t exist or have a minute effect. Even if they did, whatever has happened lower in the order, Jeter has had Nick Swisher hitting behind him for 50-plus games this year, so there is really no benefit to passing him—solo shots stand a better chance of becoming two-run homers. No, Jeter is getting himself out more than pitchers have changed the way they’re dealing with him.

As far as being a leadoff batter Jeter may not have his historic OBP but yet he is batting .280 and has 125 hits, those hits are second to Cano who most are considering a MVP candidate this year.

Batting average isn’t the best measure of offense, or the third-best. It doesn’t tell you how often a player reaches base, which is, if not the only thing we should care about, pretty darned close. As for raw hit totals, you know that’s not why Cano is an MVP candidate. No one really cares how many hits he gets, but how often he hits them and where they go. You’re giving us ice cream toppings, but no ice cream, information that doesn’t really tell us anything about the quality of the batter’s season.

In other words Steve get over your dislike for Jeter and start focusing on actual changes that could help the Yankee batting order.

Jeter is a Hall of Famer. One would have to be an idiot to dislike him, especially one, as I have often said, who grew up with Bobby Meacham as the Yankees’ shortstop. Further, I said the Yankees should not move him down right now. I don’t mind arguing about things I said, but let’s not argue about things I didn’t say.