Sunday break not a bad gamble

Share All sharing options for: Sunday break not a bad gamble 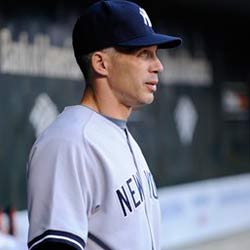 Or as Cole Porter wrote, it was just one of those things. Normally, Wallace Matthews of ESPN.com would have a very good point: why would Joe Girardi rest his regulars against their top division rival?

No Alex Rodriguez? No Brett Gardner? Berkman at first in place of Mark Teixeira? Kearns starting in left? If it wasn't for the name "Jeter" appearing where it is just about every day, at the top of the list, it would have been difficult to determine at first glance that this was a Yankees lineup card at all.

Thus did the Yankees go down quietly in the rubber game of a key series. The problem with getting exercised about this is that it really wasn’t all that key. Sure, the Yankees are now at greater risk of swapping places in the standings with the Rays, but they are also still 6.5 games ahead of the Red Sox for the wild card spot. In the worst of worst-case scenarios, the Yankees will still play on into October. There was no reason for Girardi to treat Sunday’s contest like a World Series game because, as much as we’d like to pretend it had that kind of import, thanks to the wild card scheme it just wasn’t as important as it otherwise would have been.

Besides, Girardi was taking a pretty good gamble in picking Sunday’s game. As good as James Shields was yesterday, that’s how bad he was in the 11 starts preceding it. On May 25, he pitched eight innings of two-run ball against the Red Sox. Thereafter, he made a habit of getting shellacked on a regular basis. His ERA for the 12 games between then and yesterday’s start was 6.68. Girardi had at least a reasonable basis for thinking he might be able to finesse this one with his B squad.

This year we have good races in two of the three American League divisions and all three of the National League divisions. Two of those races are going to be rendered moot by the wild card, but that’s the way it goes -- unless baseball goes to a four-division format in each league, which would require a round of expansion and realignment that just isn’t economically feasible in these deprived days, the wild card is the best way for keeping up fan interest in the teams on the fringes of the race. The price paid is that some good races are robbed of their tension. That’s the case in the AL East this year -- although if you’re a Red Sox fan you’re plenty tense. The Yankees and the Rays can’t take anything for granted, but as of right now they’re safe. If Girardi would rather keep his powder dry for a postseason confrontation, you can’t blame him. It’s no fun, but that’s the way it is.