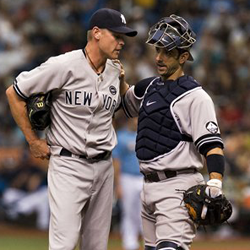 A FEW BRIEF WORDS ON KERRY WOOD
As I said on Twitter earlier, having acquired Kerry Wood, the Yankees now stand an excellent chance of winning the 2001 World Series. Kerry Wood has been fairly miserable the last couple of years. As a closer in 2009-2010, he converted 28 saves and blew nine, which is an unacceptable conversion rate. Last year, he had pitched at least somewhat effectively, unlike this season which has been marred by injuries. Still, if you put the two seasons together you get 81 games and 75 innings with 39 walks (too many) and 10 home runs (too many). You also get 81 strikeouts, which is nice but less than what Wood used to be capable of. Wood’s ERA for the last year and a half is 4.80, but that’s not representative; when you consider inherited runners he’s allowed to score that were charged to other pitchers, a more representative ERA would probably be creeping towards 6.00.

All of that said, this acquisition is much like that of Austin Kearns: it doesn’t cost much and it’s worth a try given the miserable production that the player is replacing. In Kearns’ case, that’s Curtis Granderson’s at-bats against left-handers. With Wood, his place on the roster comes at the expense of Chan Ho Park, who was designated for assignment in order to make room for him. Ironically, Park had pitched about as well as he had all year in July, but apparently his vanishing act against Cleveland two days ago, in which he initially pitched well and then did his level best to turn a blowout into a competitive game, apparently sealed his fate.

Park should never should have been signed, and in taking him off the roster, Brian Cashman tacitly admits to his mistake. Note I didn’t say "releasing him," because he’s merely been designated -- given what the Dodgers gave away for Octavio Dotel, Cashman might even know be on the phone to Los Angeles getting two decent prospects for the shell of a reliever who has rarely been good when not wearing blue letters on his chest.

When Casey Stengel would coach hitters, he would sometimes say that they shouldn’t try to do too much, "just tra la la." This is a just tra la la deal. It probably won’t make that rickety bridge to Mo-where any more reliable than it has been, but it might, which is more than you could have said for "They can take him deep in any" Park. The cost seems to have been negligible, the risk low -- Wood’s option for 2011 won’t be picked up, and the player to be named won’t be Jesus Montero and might not even be a player, but just more money. Cashman didn’t mortgage the future for transient relief help and he didn’t stand by his failed acquisition either, just tra la la.