What to make of the Lance Berkman trade

Share All sharing options for: What to make of the Lance Berkman trade 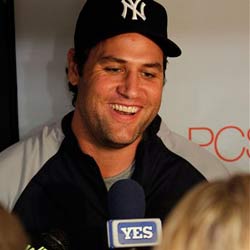 Now that the Berkman trade is official, a couple of words on the price paid to get him:

Mark Melancon was treated strangely by the Yankees this year and in general. His resume entering the season as excellent. They signed Chan Ho Park despite possessing a kid who threw in the low-90s, a cruel curve, and ground-ball tendencies. In both the minors and the majors, he was very difficult to take out of the park; in 232 processional innings, Melancon has allowed just 15 home runs. His control was also good in the minors, at least until this season. He struggled with walks in the majors, and seemed to take that problem back to Scranton with him, so we will never know if he would have licked the problem with more patient handling.

The stranger part of Melancon’s Yankees years was the way the organization piled on the innings. He was coming off Tommy John surgery in 2008, yet he pitched 95 innings, dangerously near the 100-inning, Killing Scott Proctor mark. This year, between the Major Leagues and the Minors he was already near the 50-inning mark at the halfway point. One wonders if between being blocked by an extra-organizational non-entity like Park and being worked like he was Mike Marshall ’74 we have the explanation for the right-hander’s current bout of overthrowing. Whatever the cause, however curable, it is clear that the Yankees did not believe in him. If they didn’t give him a real chance to make this mess of a bullpen, they weren’t going to give him a chance, period.

Jimmy Paredes is a 21-year-old middle infielder playing down in the Sally League. Anything can happen in the next few years, but it’s a stretch to consider him any kind of prospect. He can hit for a bit of average, but lacks power, has drawn 39 unintentional walks in 1,112 career plate appearances, and lacks sure hands at any position—his career fielding percentage at third is .858, at shortstop .899, and at second .926. With those kinds of results, he’s begging for a move to the outfield. He has the speed but lacks the bat. If he doesn’t move, he wasn’t going to push Robinson Cano, so like Melancon he won’t be missed.