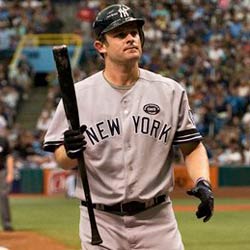 Google around and you will see that Austin Kearns was a guy I was thinking of as a possible platoon partner for Curtis Granderson going back to the center fielder’s acquisition. In truth, beyond being right-handed and being more capable with the glove than Marcus Thames, he’s not an ideal fit. First, after a very promising beginning to his career with the Reds back in 2002, he idled along at an offensive level that wasn’t terribly good for a guy playing right field, hitting .256/.350/.441 from 2003 to 2007. Then the injuries hit, elbow problems in 2008 and thumb surgery in 2009. Between the two wounds, his hitting ability disappeared almost altogether. He got in about a full season if you add the last two seasons together (568 plate appearances) and hit .209/.320/.312.

As Kearns’ contract expired last fall, it seemed unlikely he would ever again be a regular. The Indians were in a desperate phase, so they took a chance. Kearns rewarded them amply in April, hitting .373/.429/.627. There were visions of the guy who hit .315 as a rookie making an unexpected return. It was not to be. Since cooling from that hot start, Kearns has hit .247/.336/.368, firmly back in the land of insufficient results for a corner man. But wait! What are his qualifications as a platoon man, since all the Yankees are going to ask him to do is stand in against left-handers. Well, I’m sorry you asked that. He’s hitting .250/.330/.390 against southpaws, and his career rates against them are only .261/.383/.416, with just 26 home runs in 843 at-bats. When you consider that the average American League hitter is averaging .269/.346/.422 against southpaws, it is clear that Kearn’s is a subpar performance.

However, not all of those average AL hitters are capable of playing the outfield with greater aplomb than Thames, and those that can might not have been available to the Yankees. Kearns plays the position the Yankees needed to fill if they are to protect Granderson and themselves from those pesky lefties. A career .211/.267/.336 hitter against same-side pitchers, Granderson is batting .214/.252/.286 against them. Kearns is far from the ideal substitute, but he is indisputably an upgrade at the plate.

The same sort of mixed message applies to Kearns’ glove. His defensive play in right field has always been highly rated, but a comparison of defensive metrics suggests that he hasn’t shown the same ability in left. Whether that represents a true decline in defense remains to be seen; players frequently have fluctuations in their defensive performances just as they do at the plate or on the mound. Kearns has also played 68 career games in center, but it has long since been clear that he’s a player of last resort for the position.

Brian Cashman has said for the last month or so that his goal has been to upgrade the bench. He has done so here, however flawed and disappointing Kearns has been. Best of all, the terms are for the Yankees to give up a player to be named or cash, so it seems unlikely that any prospect of real value will be lost as a result of the transaction. They didn’t get an ideal lefty-masher, but they have at least begun to address a nagging weakness.