Tired of singing the Berkman blues

Share All sharing options for: Tired of singing the Berkman blues 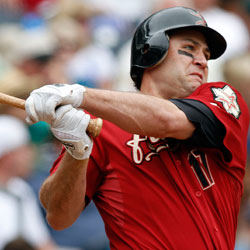 Still no Yankees pick-ups as the team hordes its prospects for the day that Boston makes Babe Ruth available. If you’re not going to use these players at the Major League level, they only have value as trade chips. They’re a bit like sushi: you can’t put it in the fridge and use it a month from now. Still, things are apparently happening. The twitterverse says that the Yankees are out on Adam Dunn, are now dogging Lance Berkman’s footsteps. For those that missed the first few minutes of the film, here’s the Berkman recap (naturally, I am alluding to the great Swedish film director, Ingmar Berkman): He’s a career .296/.410/.549 hitter, but though he bats from both sides of the plate, most of the damage has been done from the left side. Batting against southpaws, he has hit only .262/.366/.415, which is worth playing in the absence of a better alternative. However, if we’re talking DH-only, then you would probably rather sit for Marcus Thames.

We probably are talking about a player who would be restricted to designated hitter, because although Berkman has played nearly 900 games in the outfield, the majority of them in left, he was never known for his mobility and hasn’t gotten away from first base in three years, and last started even 30 games in the pastures back in 2006. He’s not going to make it easier to rest Curtis Granderson against lefties.

So, will he help? Well, he’s a patient hitter. His walk totals have been inflated by 15-20 intentional walks a year, free passes he won’t get in the AL, but he’s no hacker. His home run totals have been on a steady downward slide—45, 34, 29, 25, 13 (and counting) this year, but he’s only 34, which makes him a young Yankee—he could find a second wind. Either way, it’s the on-base percentage that’s important. If he does what’s been doing, he’ll approximate what Nick Johnson would have done had he not been built by the same engineers who constructed the Titanic. Yankees designated hitters have hit .250/.358/.424 this year—Juan Miranda, Jorge Posada, Nick Swisher, and Thames have given decent value when they have rotated through, everyone else, not so much. Again, if Berkman can just do what he’s been doing, that’s a minor upgrade, perhaps an insignificant one. If he can rediscover his essential inner-Berkmanness then the Yankees would obviously get a major upgrade at the position. Again, Thames should still be part of the rotation there.

Berkman’s contract would require the Yankees to either pick up his $15 million option for 2011 or buy him out for $2 million at the end of the year. He will almost certainly be bought out regardless of how he does, and both he and the Yankees can proceed in any direction from that point. He would just be a three-month rental, August, September, and with luck all of October. If the Yankees aren’t going to give up much in the way of prospects in return for taking on what remains of Berkman’s $14.5 million this year and the $2 million buyout, well, it’s just money and they will still have all of those lovely prospects to use at some point. When? We’re still not sure. Maybe next year, maybe in trade for someone even better for Berkman, say Cliff Lee or Dan Haren. Or maybe not.