Haren another egg for basket

Share All sharing options for: Haren another egg for basket

599 EH
Craig Calcaterra has a fine post up about the lack of excitement regarding Alex Rodriguez’s imminent home run No. 600. Now, when you write a post talking about the general lack of excitement about something, you run the risk that you are projecting your lack of excitement on the rest of the populace. Since I share said lack of excitement, I have no problem with presuming universal home run fatigue, A-Rod fatigue, or fatigue in general. In this case, I don’t think it’s Rodriguez, though his frequently observed anti-charisma probably has something to do with it. No, it’s that in modern baseball, home runs have become so cheap that it feels as if all of the 500 and up guys of recent years—Gary Sheffield, Manny Ramirez, Rafael Palmeiro, Jim Thome, A-Rod, Junior Griffey, Barry Bonds—didn’t quite earn their way up the list.

My saying that has nothing to do with the fact that there have been PED associations with everyone on that list except Thome and Griffey. I am still skeptical that PEDs had a lot to do with what we’ve been seeing. Rather, the overall level of home run hitting was so inflated in this period that historical 20-homer guys became 30-homer guys and 30-guys became 40 guys and so on. It’s not that they necessarily did anything wrong, particularly Junior and Thome, but simply that, to paraphrase Yogi Berra, in the currency of home runs, 10 cents wasn’t worth a nickel.

That said, Rodriguez deserves some credit. He’s a legitimately great player, and it wasn’t just the environment; not every player from the last 15 years has popped 600 home runs, or 500 for that matter, or 400. He had the ability to prosper in the low-gravity/friendly ballpark/rabbit-ball years that we just went through. We call that ability "talent." Maybe, then, it comes down to the lack of emotional attachment after all. I despite all of that arbitrary "true Yankee" stuff—if your paycheck says "Yankees" you’re a Yankee—but Rodriguez is one of those players will go into the Hall of Fame with a blank cap, or should. If the deal with the Red Sox had gone through, he’d be a true Red Sox. It didn’t, so it happens that he’s a Yankee.

Again, there’s a risk of projection in that evaluation, but it’s not about Rodriguez’s personality or lack thereof. It’s just an inevitable fact of his three-team history and the manner in which he was acquired from the Rangers. 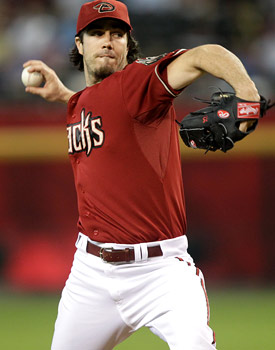 THE HAREN FLEA MARKET
The asking price on Roy Oswalt is apparently painfully high—the Astros are rumored to want to reboot their whole roster on the basis of this one deal, a dubious notion given that Oswalt has no-trade rights that he’s trying to leverage into the activation of his $16 million option for 2012. This isn’t a bad thing for buyers because Arizona’s Dan Haren is the better target. He’s younger, has a track record of pitching with excellence in the American League, and is more of a strikeout guy. At least superficially, he has also not pitched as well as Oswalt—defense-independent ERA estimators suggest they’ve been quite comparable—and that might mean a somewhat lower asking price. Like the Astros, the Diamondbacks need a bit of help everywhere except perhaps catcher, so the price is going to come down to whether Jerry DiPoto’s illusions are as grandiose as Ed Wade’s. On the positional front, a solid outfielder or second baseman couldn’t hurt (Kelly Johnson is having a good year but isn’t long for that position or Arizona), and as far as relievers go, you name it, they need it.

I’m still a bit iffy on the whole trading-for-a-starter thing, but with Andy Pettitte on the DL for an indeterminate amount of time, Phil Hughes putting up a 5.51 ERA since mid-May, A.J. being A.J., and Javier Vazquez being a scary-fly-ball free agent, it’s not necessarily a bad idea to go for a Haren, he being a good piece not just now but for next year and the year after (at least as much as you can tell with pitchers). If such a deal happens, it would go a long way towards making the postseason results more predictable, but it wouldn’t necessarily solve every problem. The bullpen still needs more help, Curtis Granderson—"hot" against lefties all the way to .223/.263/.298 still needs a platoon partner. Eggs need to be in multiple baskets.

Complicating the eggs/baskets solution is the age of players like Derek Jeter, A-Rod, and Jorge Posada. The Yankees need ready replacements for the next wave of injuries and declining production. Since coming off of the DL, Posada has hit .226/.355/.395, and those catchers the Yankees have need to stay in the organization lest the club get stuck with a full season of Frankie Cervelli hitting .250/.330/.330 or worse.

THE PICTURE OF DORIAN MOYER
I’m depressed about (a lot of things, but also about) Jamie Moyer, who is going on the disabled list with a sprained ulnar collateral ligament and strained flexor pronator tendon in his left elbow and probably won’t be rejoining us for the rest of his life. As long as Moyer continues to pitch, I’m still young. Please, please, get well soon, Jamie!