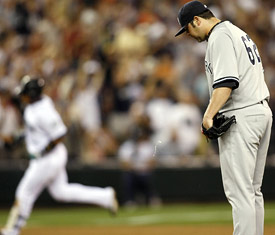 The big topic of discussion on Monday, and for the foreseeable future, was Andy Pettitte’s injury. Would it motivate the Yankees to go after a starting pitcher? The Yankees were quick to issue a denial. Nope, said Brian Cashman, we want to bulk up our bullpen and bench.

Now, it is swell for the Yankees to make statements like this, but you have to consider them with skepticism because this was the same team and the same general manager that wasn’t in on Mark Teixeira, nuh-uh, no room at the inn or the budget, we can’t even squeeze another locker into our super-sized new clubhouse, no way. More recently, the same front office, despite possessing a rotation that would seem full up by the standards of even great teams, made a stealth run at Cliff Lee. Thus, though it is clear that the Yankees do need to upgrade bench and pen, it is far from certain that they aren’t trying to do more.

Having acknowledged that anything is possible, the question then becomes, "Who and how?" We talked a bit about the who on Monday. As for the how, that’s more complicated, because although it’s not easy to visualize how to fit prospects like Jesus Montero, Brandon Laird, and David Phelps into the present roster, you don’t want to just give them away if it can be avoided. However, in order to acquire a Roy Oswalt, Dan Haren, Prince Fielder, Adam Dunn, or Jayson Werth, just to name a few intriguing possibilities, a buyer is really going to have to spend. This is especially true for rebuilding teams like the Astros, Diamondbacks, and Nationals, who have to bring back an exciting package so as to justify the loss of a star to their fans (I watched Monday night’s Mets at Diamondbacks; official attendance was 18,000, but it seemed more like 1,800). That means that the ol’ Fernando Seguignol-and-cash-for-John Wetteland isn’t going to fly here. It’s going to take the proverbial package, not a bag of old groceries.

I would suggest that one way to ease the pain of parting with potential is to include a player whose potential is seemingly already spent, Joba Chamberlain, but I don’t intend to imply, in naïve, call-in show fashion, that if the Yankees dangle the great and powerful Joba that general managers will faint and come stampeding into Cashman’s parlor to offer up their best and most potent players (those callers inevitably overvalue their trash and undervalue the other guy’s treasure). Joba’s performance has seemingly declined to a level where trading him now would make little sense. His value is at low ebb, and he’s going to need to show better results before he recaptures any of the mystique that surrounded him back in the pre-"A Bug’s Life" days.

Joba may never be that good again, but it’s a safe bet that he’s going to finish the season in better form than he’s shown to date. Don’t think about his ERA or his won-lost record and just consider the basics: he’s pitched 39 innings. He’s allowed just two home runs—good. He’s walked just 14. That’s not Lee, but it’s also not Craig Kimbrell, so—good. He’s struck out 43, or 9.9 per nine innings—very good.

What the heck is going on, then? Well, hitters are averaging .391 on balls in play. Whether that’s a result of bad luck or bad mechanics on Joba’s part I don’t know, but I do know that it should be fixable. The stuff is still there; with the return to the bullpen, he’s letting his fastball go at higher speeds than last year, if not the 100 mph form of 2007. The things that Joba can control—walks, strikeouts, keeping the ball in the park—are still there. The rain of hits is very likely transient. The one thing we can’t say for certain is when it will end, only that it should.

Additionally complicating any trade is Chamberlain’s upcoming eligibility for arbitration. He’s making just under $500,000 this year, but that figure is going up. Few, if any, teams will want to be on the hook for a big raise given his performance so far. It’s just another reason why those that are so angry and disappointed by Joba’s performances of late had better holster their hate and count to 10; it’s going to be very difficult for Cashman to get something like real value for him right now. Battered AND expensive? That’s not going to bring a starting pitcher of position player, and as my wise Baseball Prospectus colleague Jay Jaffe says, “trading him for another reliever is a recipe for sitting next to Bill Bavasi and Dave Littlefield at the next winter meetings banquet.” The Yankees need a solid reliever, but he doesn’t want to be the guy who replaces Lou Gorman in the annual, “Which GM traded a coming star for one month of Larry Andersen?”

So please, hang up the phone. Joba is a problem, part of a bullpen gone awry, but at 24 years old and with a fastball that has averaged 94 this year, it’s spectacularly premature to give up on him. He’s not the new Rob Dibble, sorry. He’s not an ace starter. Again, sorry. He’s been through a great deal in a short career, and the least the Yankees can do—for the team, not for him—is to leave him alone and figure out what they’ve got. They should be rewarded. Now, if Jerry DiPoto is reading the same numbers I am, if his scouts are telling him that the stuff is still there, and he calls up Cashman and says, “Hey, I’ll give you Dan Haren and Justin Upton for Joba and a prospect,” you can throw the foregoing out the window, but that isn’t going to happen. Failing that, holding on is the best choice.

MORE FROM ME
I’ve got a brief (free) bit up at Baseball Prospectus on the Lou Piniella All-Stars, a group that includes Don Mattingly. There is also the announcement of a live chat with yours truly on Friday at 1 p.m. Finish up your lunch (no fast food!) and come talk some baseball and what-have-you with your slightly dinged-up host. As usual, if you can’t make it then, you can input your questions at anytime.