I’m a bit reluctant to come down on a guy without knowing all the details, but if the Yankees had an agreement in principal and then the Mariners backed out because they were "concerned about David Adams’ ankle," as Joel Sherman (who has been all over this story like yellow feathers on Big Bird) reported, then Jack Zduriencik is without honor. First of all, just how severe an ankle injury was it? Was his foot separated from his leg? Hell, was it such a high sprain that his head was separated from his neck? Short of something really radical like that, an ankle injury seems like too transient a cause to derail a trade. In addition, the Yankees had other infielders in the system -- Corban Joseph is one level lower than Adams and two years younger, but in all other respects seems like the exact same player, a second baseman with the ability to hit for a nice average but whose defense is questionable enough that his future is murky. You don’t want Adams or Joseph, then take Eduardo Nunez (please). If the ankle was really what killed the deal, then it was a pretense pure and simple. 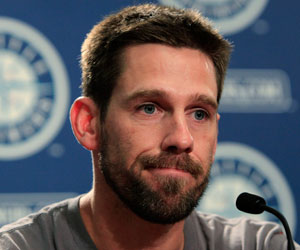 It seems that Zduriencik made a calculation that having a Major League-ready player in Justin Smoak was more attractive than having the potential of Jesus Montero. It’s his right to come to that conclusion, and I wouldn’t necessarily disagree with it, although my Baseball Prospectus colleague Jay Jaffe makes a good point when he says that Smoak is a first baseman and that is all he will ever be, while with Montero you still have the chance, however remote, that he’ll turn into Roy Campanella. You can understand, though, the Seattle GM’s desire to show his fans something NOW rather than at some point in the future.

Whatever the case, it’s still bad form to accept someone’s offer and then shop it. Again, we don’t know if that’s what happened, but the Yankees seem to have dropped some hints that that was what happened (Ken Rosenthal tweeted that the "Yankees are livid with Mariners"). Essentially, he used the Yankees as a tool to leverage the Rangers. It worked, so good for him, but he probably burned a bridge in doing so.

Meanwhile, the Yankees still have a solid, though as I suggested earlier, playoff-problematic rotation. There are still other places they can turn if they want to do that, though none of the choices will be Cliff Lee. On the plus side, none of them will cost as much. The Yankees get to hold on to some good prospects, including Montero, who is still very special. As I said earlier, so what if he’s a DH? Team’s need productive designated hitters, and there’s no rule that says they have to be fat old guys. If Montero turns out to hit like Vladimir Guerrero but can’t play the field, well, I don’t see too many people complaining about what Vlad can’t do.

That’s for the future. In the meantime, the Yankees having been used and thrown away. Brian Cashman can exact revenge in one simple way: he must pick up a right-handed bat to play the outfield and/or DH against lefties. This takes on an added urgency, because that righty, whoever he is, stands a very good chance of facing Cliff Lee in a big playoff spot. Magglio Ordonez is a .373 career hitter against Lee. Paul Konerko has killed him, hitting .362 with six home runs in 47 at-bats, but doesn’t figure to be available. Juan Rivera has hit three home runs off of him in just 15 at-bats. Jose Guillen has hit .360/.407/.640 against him. Jayson Werth would be a good investment for the reasons I related in the last entry.

Cashman got knocked down. As the old Fields-Kern song goes, you pick yourself up, dust yourself up, and start all over again. The Mariners won’t be in a position for the Yankees to beat them in any meaningful way. The most appropriate, best revenge might come in the postseason against the Texas interlopers who upset the deal. The Yankees aren’t set up to beat Lee yet (not to mention C.J. Wilson, the likely second or third starter in a playoff series), but they can be once the Yankees GM gets back on his feet.