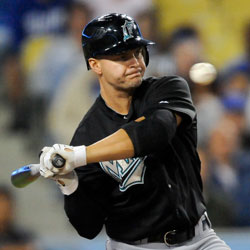 Since last winter and as the season has gone on and Nick Johnson has disappeared, I’ve said that the Yankees could use a platoon partner for Curtis Granderson, preferably one who had the defensive skill to play a better outfield than Marcus Thames, and wouldn’t kill you if he was pressed into everyday service. I just wasn’t clear on who that guy is. Now comes this report from the Palm Beach Post:

Already there are rumblings within the organization that the Marlins may break up the roster by the July 31 nonwaiver trading deadline.

The feeling is that only Florida's two All Stars - pitcher Josh Johnson and shortstop Hanley Ramirez - are considered off-limits in any trade talks. The team also would likely keep all of their young players still under club control. [h/t Buster Olney]

Meet Cody Ross, Flordia Marlins outfielder. A right-handed hitter, Ross was a fourth-round pick of the Tigers’ back in 1999. Ross took the slow road through the Minors, always showing good power but never hitting for enough of an average to look like a coming star. The Tigers gave him a taste of the Majors during their 2003 annus horribilus, then sent him to the Dodgers the following spring for a now-forgotten left-handed pitcher, Steve Colyer. The Dodgers had no real interest in him and sent him out for most of 2004 and 2005. He made the team out of spring training in 2006, but with an outfield of Kenny Lofton, J.D. Drew, and Andre Ethier he wasn’t going to play, so they dealt him to the Reds for another forgotten lefty, Ben Kozlowski. The Reds were also deep in outfielders, so they sold Ross to the Marlins, his third team of 2006.

Ross’s production against righties is much less exciting, .259/.314/.424, but were the Yankees to acquire him, they likely wouldn’t be asking him to play much against regular-handers anyway. Ross’s other weakness is defense—sort of. He’s not an ideal defensive center fielder, but the Marlins keep listing him there because everyone else they’ve tried has failed. The glass-is-half-full view of this is that a under-qualified center fielder should be an over-qualified left fielder, as Johnny Damon was two years ago.

Ross won’t be eligible for free agency until after 2011. Arbitration eligible, he’s making about $4.5 million this year, which would rank on the low end of the Yankees payroll. I don’t know how easy Larry Beinfest is to deal with, but you’d think that Ross’s modest talents wouldn’t provoke requests for Jesus Montero in trade. If the Yankees don’t go after a big-time DH, this could be a useful pickup to strengthen the bench and lessen the team’s vulnerability to lefty starters and spot relievers in the postseason.

ALL-STAR GAME STUFF
Robinson Cano out of the Home Run Derby with a minor back injury that conveniently just popped up: Good. No use risking so valuable a player on something as useless as the Derby. I enjoy watching batting practice, but at least BP has a purpose. The HRD is a tedious exhibition.

Nagging injuries keep Mariano Rivera out of the game: It’s always a loss when you miss an opportunity to watch baseball’s version of Fred Astaire (by which I mean grace and poise personified), but the guy is 40. It would be shocking if he didn’t have some injuries. Joe Girardi has been very careful about his usage, treating him like a Fabergé Egg at times. If Rivera really is so frangible, there’s no reason to risk whatever time he has left on the mound in a meaningless game that has injured so many excellent players (Dizzy Dean and Ted Williams come to mind) for no real gain.

MORE FROM ME
Still dealing with family stuff, but I’m slowly getting back into the flow at Wholesome Reading, with more to come as soon as I’m done here. Warning: politics, oily lakes, oceans, hair.