Just what they needed

Share All sharing options for: Just what they needed 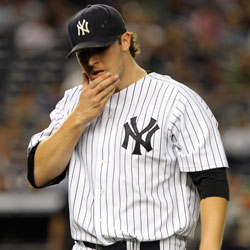 It was the Yankees’ misfortune to suffer bad timing, to encounter Cliff Lee and Felix Hernandez, two of the best pitchers in baseball even if they are on a bad club, with two pitchers who were not up to matching their aces taking the mound in opposition. Since pitching seven shutout innings against the Tigers in his sixth start on May 12, Hughes has made eight starts, four of them quality, four of them factory rejects (there is no accepted term for a "not quality start," but "irregular pants" or "mismatched socks" would do fine). His ERA for the period was threatening to crest the fragile barriers that hold the oily 5.00 water out at sea, and he finally did swamp the lowlands in tar against the M’s; his ERA since May 12 is now 5.33 in 49 innings. The good news is that although his start on Tuesday was a true thrashing, Hughes’ overall performance during the period hasn’t been terrible. He’s allowed a few home runs, sure, but his walks and strikeouts are still in the right place. However, over the course of the season, his results on balls in play have gone from "otherworldly lucky" to "about average" to "kind of unlucky." The Yankees play strong defense and it’s not like they’ve let him down in the field, but even a good defense can watch balls elude gloves when they’re hit to the right place. Whatever the cause of Hughes’ recent foibles, there is a basis for recovery here.

Javier Vazquez pitched well enough against the Mariners to win under most circumstances (one of those quality starts again), and he completed June with a 3.23 ERA, his best yet this season. Yet, Vazquez, with his propensity towards giving up long flies, is not particularly likely to match a shutout with a shutout—he hasn’t pitched one since 2005. He last pitched seven scoreless innings last September. He last pitched eight scoreless innings two years ago. The Yankees couldn’t stay in these games, Lee and Hernandez didn’t bend, and you had the Yankees being shut out on consecutive days for the second time this season, an encore of their poor showing in Detroit back in mid-May, when Rick Porcello, a pitcher now in the minor leagues, and a couple of relievers held them to four hits, followed by Justin Verlander and two relievers pulling the same stunt a day later. Note I said days and not games; the Yankees played a doubleheader on May 12, and the aforementioned Phil Hughes performance led to an 8-0 win in the nightcap. The Porcello shutout came first.

You’ve read about how the last time the Yankees had consecutive complete games hurled at them by teammates was by Chris Carpenter and Kelvim Escobar back in 2000. That’s not insignificant, because the 2000 Yankees were probably the weakest championship team in club history. Only three of the regulars—Jorge Posada, Derek Jeter, and Bernie Williams—were above-average performers, and Brian Cashman was ultimately forced to deal three prospects to the Indians for David Justice so as to put a little pep in the lineup. The 2010 squad is a far deeper offensive unit, but it still seems as if it could use a little extra help.

The Yankees haven’t suffered too many back-to-back shutouts in recent years. They have mostly had excellent offenses, and the era has been offensively supercharged, making shutouts more unlikely, so in some seasons they’ve only been shut out two or three times. They were blanked in consecutive games once in 1999 (Chuck Finley and Omar Olivares, with Troy Percival closing both games), once in 1996 (the Angels again, this time Jason Grimsley, the only complete game shutout of his career, and Finley again with the bullpen), once in 1991 (Jim Abbott for the Angels—what is it with the Angels?—and Randy Johnson and the pen for the Mariners), once in 1989 by the A’s—we’re getting into ancient history here. Suffice it to say that it has been a rare occurrence going back to 1984, when a struggling edition under Yogi Berra was blanked on consecutive days four times. They experienced the one thing we haven’t seen this year, back to back complete game shut outs by an opponent. That took place that May, when—guess who?—the Angels came to Yankee Stadium and Geoff Zahn and Ron Romanick did the honors. Omar Moreno led off the second game for the Yankees; sometimes shutouts are self-inflicted.

Fortunately, Mr. Sabathia came along to throw some biscuits at the Mariners and salvage something from the series. Now the Yankees are back in roughly the same position as they were at the outset of the Mariners series. They face a Blue Jays club that is vastly inferior to their own and need to capitalize.

In an earlier post about the Blue Jays, I predicted their stab at contention would be but a memory by mid-July: it seems as if they’re a bit ahead of my proposed schedule. Having been swept by a Cleveland club that was on a pace for 100 losses, the Jays will face the Yankees this weekend having lost five straight games and seen their record plunge back to .500.

In the month just ended, the Jays went 9-17. Their bullpen let them down and their offense just quit, averaging .221/.293 /.367 in the month for weddings. When I typed that, it came out as "the month for weeding," and perhaps that’s right—in June, the Jays were weeded out of the postseason race. None of their hitters had a good month, and Jose Bautista, who had shocked baseball by smashing 16 home runs in the first two months, almost completely vanished, hitting .179, albeit with four more home runs. On the pitching side, Brandon Morrow and Ricky Romero continued to pitch quite well, but Brett Cecil has been roughed up in three consecutive starts and Jesse Litsch, fresh off the rehab trail, has split quality starts and crushings.

As the old saying goes, in baseball momentum is dependent on the next game’s starting pitchers. The Jays bring Brett Cecil, whose last three starts, all against National League opponents, have been miserable. He went 0-3 with a 9.19 ERA. Earlier, he held the Yankees to one run in eight innings. It would be nice if the home team could keep the pressure on him, keep up the scare as they used to say in the Civil War (I wasn’t there, but I heard about it), but their own starter is A.J. Burnett. Unless you’ve been napping, you know the sorry tale: five starts in June, five losses, an 11.35 ERA in 23 innings. Burnett allowed hits, he allowed walks, he allowed a volley of home runs. He was truly a one-man band.

The Yankees have a tough schedule in July. After the Jays’ series, they undertake one of those western road trips that tend to cause problems regardless of the opponents. The trip includes four games against the Mariners, which should also mean facing Lee and Hernandez again, not to mention Erik Bedard, who could be back from rehab by then. They return home to face the Rays, those Angels again, and a Royals club that can hit a bit if nothing else. It would be helpful to close out this homestand with a solid series before enduring the travails of the road. Burnett has to get the team off on the right foot, but will he? And what will the Yankees say if he does not? That he needs more of a reunion with Dave Eiland?

AND ONE MORE NOTE
As shaky as back-of-pen men Chan Ho (Ho! What a shot!) Park and Chad Gaudin have been, making a change to the relief crew makes sense, but why in the name of Firpo Marberry is Dustin Moseley the choice? I realize there is a contractual imperative at work here, but this is a 28-year-old with a career ERA of 4.35 in the Minors, few strikeouts, and a Major-League ERA of 5.41. A pitcher can surprise you with just a few small tweaks, but Moseley’s 4.21 ERA at Trenton with the usual ratios doesn’t seem to hold much promise.

Better news is that Scranton has added David Phelps from Trenton (h/t to the LoHud guys). Now three years and 55 games into his pro career, the Notre Dame righty has a 27-6 record and 2.37 ERA to date. Phelps has an excellent fastball and strong command of it, but the jury is still out as to whether his other pitches are good enough for him to make it as a starter. Whatever his ultimate role, he has far more promise than the pitcher he’s replacing in Pennsylvania.

A final thought on this matter: who did Jonathan Albaladejo offend? He hasn’t performed well before, but 12 strikeouts per nine innings would seem to cry out for another chance.