Not trading a kingdom for a bullpen horse

Share All sharing options for: Not trading a kingdom for a bullpen horse 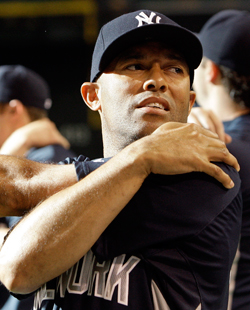 OH ME OF LITTLE FAITH
I never stopped watching, never looked away (in my position you can’t), but I had mentally resigned myself to another Yankees loss Sunday night. Andy Pettitte didn’t have his best stuff, and Joe Torre wisely exploited the American League’s more laid-back style of play by going all bunt-y on him. Clayton Kershaw was dealing. Brett Gardner’s injury had shortened the bench and put the game in the hands of Chad Huffman and Colin Curtis at critical junctures. The bullpen inspires little confidence aside from Mariano Rivera. Kershaw was cruising and Jonathan Broxton hadn’t blown too many saves. You know what happened next: pretty much every reasonable expectation was upended.

The key moment was Jorge Posada’s incredible 10-pitch at-bat with one out. Broxton was unnerved, or perhaps just fatigued, and good ol’ passive Joe Torre, the same guy who just watched as Joba Chamberlain was eaten by insects, just stayed with his guy, the captain going down with the ship (or is it vice-versa in this case?), and watched the game fade away. In the process, he pushed Broxton to a career high in pitches thrown (48), a rather pointless gesture given that Broxton wasn’t getting the job done anyway. In a less venerated manager, this might be a firing offense.

In any case, Torre is no longer the Yankees’ problem in any sense except the one in which they eventually capitulate to history and hang his number on the wall. Of larger concern to the Yankees is the state of the bullpen. Had the Dodgers not yielded the lead and the game had continued, Joe Girardi would have had to turn to Chad Gaudin, given that he had already gone through David Robertson, Damaso Marte, and Joba Chamberlain. This left only Chan Ho Park and Boone Logan, and they had already had their chance to give up runs the day before. Given that Chamberlain seems to veer between dominance and mediocrity and Robertson has only recently shown any consistency, there is really only one pitcher in the pen that Girardi can trust, and that’s the aging-though-still-dominant Hall of Famer. It would have been heartbreaking had the Yankees overcome Broxton only to have to lose the game on a Park or Gaudin moon-shot.

Trading for relievers is a tough business. A general manager can get burned -- the infamous Jeff Bagwell for Larry Andersen deal of 1990 is merely the most extreme example of what can happen when a GM feels obligated to trade a potential long-term asset for a short-term patch. Larry Andersen was a fine pitcher for close to 20 years, and he pitched well for the Red Sox as well. It wasn’t that the Red Sox acquired a bad player; it’s that they traded a probable Hall of Famer for someone they weren’t going to keep for longer than a month or six weeks. The player being given away doesn’t have to be a future star to make that a painfully embarrassing exchange. On the octopus’ other hand, flags fly forever, so if that last reliever is the one that can get you over the hump, who cares if you toss away a Bagwell? It’s making value judgments like these that leave four out of five ex-GMs as shivering, incontinent wrecks.

Of the teams that are out of the postseason running and whose free agents-to-be include relievers, the Diamondbacks count the sometimes sort-of effective Aaron Heilman and the not-at-all effective Chad Qualls. Qualls would actually be an interesting acquisition; though he’s been absolutely lambasted this year, over the prior six seasons he was one of the most consistently effective relievers in the game, posting a 3.32 ERA in 409.2 innings. The batting average on balls in play against Qualls is a remarkable .467, which suggests he’s not only been bad, he’s been unlucky. Luck can change. What doesn’t change is injuries, and when a pitcher has a sudden loss of effectiveness it’s natural to suspect that what’s happening is an unacknowledged or undiscovered physical breakdown. If Qualls is healthy, you would think that as a pending free agent who has pitched about as badly as one can that he might come cheaply.

The Indians, another club dead in the water, would no doubt shift Kerry Wood in a heartbeat since there is no way they’re going to pick up his option for 2011, but he has been too wretched to trust. The Brewers could deal David Riske rather than pick up his 2011 option, but Riske is risky, both in terms of health and performance. That leaves the Yankees trying to pry someone better from a team that might not be under any obligation to divest, which means paying a higher price. Ask yourself this question: would you give up Jesus Montero for, say, Brad Ziegler? What if you really believed that Ziegler would make the difference between winning the division and watching the Rays and Red Sox in the playoffs, or that the extra reliever would help you get through the playoffs to the World Series? What if you knew that ownership was going to make your life hell if your team crashes and burns?

And speaking of Montero…

MONTERO ALERT
He’s waking up. In his last 10 games, the 20-year-old is hitting .342/.375/.711 with three home runs in 38 at-bats, boosting his overall rates for the month to .299/.337/.540. He might have needed time to adjust to being a very young player at Triple-A, or last summer’s hand injury held him back, or the pressure of trying to improve his defensive game had him overly distracted. Perhaps it was all three, or maybe none -- sometimes even great hitters go into long slumps. Now we get to see if he can sustain this run and get himself in the picture for a second-half call-up or next year’s DH situation.

It’s worth restating this obvious point: if Montero continues to develop, if Brett Gardner finishes the year the way he started it, it gets very difficult to see where a free agent like Carl Crawford fits in. That’s a good thing in that (a) it speaks highly of the team’s evolving depth at some positions, (b) the Yankees can keep their payroll down, and (c) not give the Rays a 2011 first-round draft-pick. Next year’s draft class is expected to be talented, and the Yankees won’t want to sit out that dance.