FLABBERGASTED
Give Joe Girardi 10 points for pinch-hitting Jorge Posada for Curtis Granderson against tough lefty Hong-Chih Kuo, who coming into Saturday’s game had held left-handed hitters to a .000 batting average (0-for-24). Deduct 50 points for failing to pinch-hit for A.J. Burnett with runners on first and third and one out in the top of the fourth inning trailing the Dodgers 5-4. Burnett, in the process of being pounded for the fifth consecutive start, had nothing 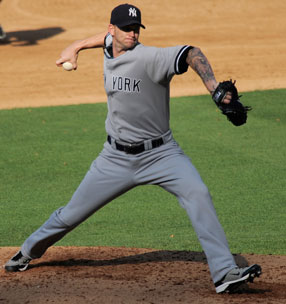 more to prove on Saturday -- he wasn’t better, despite much ballyhooed bravado after successful sideline and bullpen sessions -- and Girardi had nothing to prove to him; letting Burnett stay in so as to convey a message of confidence in him proved to be an oddly timed and foolhardy gesture. A real message of confidence would be letting him make his next start as scheduled. Letting him continue on Saturday was an act of blind optimism, a completely different kind of animal; wishful thinking is not leadership.

Had the Yankees tied the game at 5-5 with a sacrifice fly instead of asking Burnett to bunt and then asking Jeter to come up with a two-out hit, then started the bottom of the fourth with a fresh pitcher, the entire game might have changed. Yes, there is an assumption here, that a pinch-hitter would have delivered the fifth run. We’ll never know. The pinch-hitter could have hit a pop-up. He also could have hit the ball out of the park. The only thing we can know for sure is that the pinch-hitter would have had a better chance than Burnett of delivering more than an out.

Girardi’s gesture proved to be a hollow one just minutes later, when Rafael Furcal executed the old Casey Stengel "butcher boy" play and beat out a high chopper to first and Burnett followed with a walk to Matt Kemp. Faux confidence discarded, Burnett was gone in a puff of smoke. Further misadventures were still to come as Girardi called upon arsonists Boone Logan and Chan Ho Park, who helped put the game out of reach with three more runs, and only resorted to David Robertson, ERA of 1.69 in his last 15 games (16 innings, three runs) when the game was already in the bag for the Dodgers. Deduct five more points, skip your next turn.

We cannot expect the Yankees to win them all. Nor can we know what would have happened if Girardi would have pursued a different course. However, it is rare that a game so clearly turned on a manager’s decision. Managers don’t always get to have a huge impact on what happens between the lines; their main chance to work magic is when they write out the lineup card and assign roles to their various position players and pitchers. In this case, though, Girardi had a chance to throw the breaks on runaway train Burnett and possibly snatch a victory from the tattooed jaws of defeat. He had 23 innings of bad pitching as evidence that he had nothing to lose and everything to gain by making the call. Instead, he let the train roll on.

As for Burnett, the Yankees have minor league alternatives should they choose to shelve Burnett for any length of time, though the most exciting ones are at Double-A Trenton, not Scranton. In the end, though, they may have to muddle through and keep running him out there until he finds himself -- the guy is signed through 2013.