I hate second-guessing the manager and try hard to restrict this feature to first-guessing or just avoid the topic altogether, because for the most part it’s just not worth doing. However, there are times when I just can’t resist. I usually restrict such thoughts to the playoffs, but Friday night’s game against the Mets provided an example so excruciating, and so topical, that we must proceed. 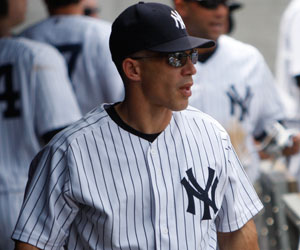 With the Yankees trailing 1-0 in the bottom of the seventh, Frankie Cervelli led off with a double. This brought Chad Huffman to the plate. Huffman is neither experienced nor a particularly great hitter, but the manager has to keep in mind that as a rule, a righty hitting against a righty is generally not going to be at as large of a disadvantage as a lefty hitting against a lefty. Now, take that last statement and double it if the lefty in question is Curtis Granderson. Also take the part about Huffman and add something on the positive side for the Mets having the 39-year-old journeyman Elmer Dessens in the game.

Despite the annoyingly incontrovertible reality of Granderson’s helplessness against same-side pitchers, Girardi called on him to pinch-hit for Huffman. This provoked a predictable response from Jerry Manuel: he pulled Dessens and brought in a far more effective reliever, lefty Pedro Feliciano. Girardi had painted himself into a corner. Granderson predictably whiffed, missing strike three by approximately the distance between the average Grand Canyon butte. Granderson went down without even moving the runner to third, never mind scoring him. Feliciano then retired Brett Gardner and the incredibly slumpy Derek Jeter (14-for-67 in June; 4 for his last 29). Obviously, had the game been tied there, the remainder would have had a much different complexion.

Although no one faults Joe Girardi for carefully hoarding the innings of his 40-year-old closer, this was the second game in a row where a Rivera appearance might have meant keeping the game close enough for a final charge (tonight the Yankees nearly climbed the hill anyway). His avoiding him against the Phillies seemed reasonable, but passing on two such opportunities was wasteful. Worrying so much about breaking your best reliever that you don’t use him at all is no different than his being on the disabled list -- either way, he’s not available when you need him. I’m not faulting the use of Chan Ho Park given that the usually arsonistically-inclined Park had pitched well of late, but after Park had helped the Mets to a 3-0 lead and was bailed out of further trouble by Boone Logan, Girardi asked Logan to navigate his way through an additional inning filled with righties and switch-hitters, a move tantamount to throwing in the towel. Logan wasn’t up to the challenge, and the Mets picked up their fourth and final run.

In the end, the runs scored against the relievers were irrelevant given that the Yankees’ offense failed to score at all. Still, we can’t know how the game might have ended had Girardi had a better night. With the Yankees and Rays losing and the Red Sox picking up another win, the Yankees are another bad day from falling out of first place and simultaneously being caught by the Red Sox. Stay tuned!