I come to you this evening from the Critical Care Unit waiting room of a metropolitan area hospital, where my father is attempting to make his way through another stay on the disabled list. I don’t want to give you the impression that the old man is the retired-accountant version of Nick Johnson or a young, frangible Paul Molitor. Until his recent bout with a cascading series of system failures, he’s been fairly solid. I mean, the Iron Horse he ain’t, but he’s been cooking along at a fairly stable pace between incidents until this season. It’s kind of like Rickey Henderson’s 1987, when the hamstring just wouldn’t heal, its intransigence driving Lou Piniella into fits of impotent rage.

The only kind of fit I’m having is the one that comes on in reaction to a nightmarish situation that can’t be avoided. It’s that night-before feeling that you get if you’re about to have surgery. It’s not me, not this time, though I’ve been there, but one I’m experiencing vicariously due to Pa’s dilemma. And I’ve never called him "Pa," because this isn’t "Little House on the Prairie," but it will do for now. No one has said that it’s curtains for my father, but he is in a difficult place and all I can really do is root, root, root for the home doctors, wait, watch, and offer my support. Oh, and I can occasionally throw out bits of trivia about old time ballplayers. I’m surprised they don’t offer me a medical degree on the basis of that ability alone. I could be Dr. Irrelevant.

The CCU kicks all visitors to the curb during a 90-minute shift change. I got to the waiting room a little bit ahead of the throng of similarly worried relatives (no one who has a relative in critical care returns from a visit a-tap-tap-tapping their toes and trilling, "There’s a Rainbow ‘Round My Shoulder" with Jolsonian brio; that was one of the incongruities that made Dennis Potter’s "The Singing Detective" so effective). Shouldering aside the young and the elderly alike, I seized control of the television set. For the first and, I am hopeful, only time, I am grateful that the game is on My9, for the hospital does not have YES. Through 1.5 innings, the Yankees are down 1-0, and Javier Vazquez looks, well, Vazquez-y. Is that better than appearing Joba-ish? I leave that to you. To paraphrase the Beatles, the love you take is equal to the outs you make.

GRANDERSON SITS VS. A SOUTHPAW

I had intended to make one of this week’s entries a "To the Mats with Reader Comments," but of course my honored father’s illness (right after going out of warranty, wouldn’t ya know) delayed that. I had wanted to respond to the fellow who said that Curtis Granderson’s 742 lifetime plate appearances against lefthanders should be considered a small sample that he might conceivably outgrow at the age of 29. I suppose in real world terms it might be, but it is over a season’s-worth of PAs, and he has been reasonably consistent with it. He did well, in a truly small sample, in 2005, and was passable in 2008, but the overall case, especially in terms of his problems making contact, is persuasive. Sigmund Freud said that sometimes a cigar is just a cigar. Similarly, sometimes a .208 average is a .208 average, especially when it comes with 189 strikeouts. I don’t mean to be short about this, but how many times do you have to see the guy swing three feet over an offspeed pitch from a lefty before you can take a hint? 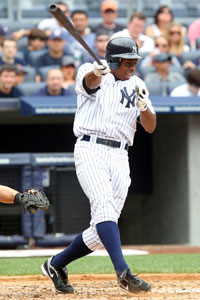 Each time I write about this Granderson platoon issue, I get some interesting negative responses, as if Yankeeland is shocked to discover that this guy is a platoon player. He is, but there’s nothing wrong with that. Most players would be better in a targeted 450 PAs than they are in 600, and Granderson is a little more extreme than most in this regard. There shouldn’t be any negative stigma to it at all; some great hitters have been platoon players. We wouldn’t be angry at a great linebacker because he wasn’t a running back, or for that matter, we wouldn’t hate on Andy Pettitte because he’s not Derek Jeter, and vice-versa. You ask players to do only that of which they are capable, and provided they excel where they are able, you should be in good shape.

If there is any anger or shock at Granderson’s limitations, it should be that the Yankees neglected to have sufficient faith in the record and plan to platoon him from the beginning.

MORE OF ME (BY NOT SLEEPING)

Over at Baseball Prospectus, I have a Red Sox-inspired bit about the best third-place teams ever. Subscribers, I’m afraid.

And on that note, the hospital TV showing the Yankees-Mets game suddenly and mysteriously lost power. I’m heading back to visit my father. Besides, he’s got a working set in his room.