Share All sharing options for: Cano first in line

For those not hip to the jargon, "VORP" stands for "Value Over Replacement Player." It measures how many runs more than the theoretical freely available replacement at his position, by which in Robinson Cano’s case I mean Kaz Matsui, although the statistic is not thinking of Kaz Matsui, or seven-layer cake or womenfolk in various states of undress, all of which tend to flit across my mental view-screen with alarming regularity (especially when the Yankees play the Orioles and there’s not much going on), but rather is using a theoretical fringe major leaguer/Triple-A player who is definitely not wearing lingerie. You will note that even though Justin Morneau’s rates are better than Cano’s, Cano ranks first in VORP. This is mostly due to the greater distance between Cano and a replacement-level second baseman than there is between Morneau and the same at first base. 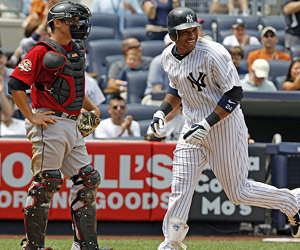 That positional difference is why if the season were to end today, Cano would deserve to get the nod for AL Most Valuable Player. While Morneau, Cabrera, and Youkilis are having comparable seasons, or even slightly better ones overall, none play a key defensive position, nor are they great defensive players, whereas Cano plays the keystone like a fiddle (if this be hyperbole, let us make the most of it). It’s also seems likely that Cano will be with the best team of the lot, with the possible exception of Longoria.

Now, what will happen in the actual voting is anyone’s guess. Traditionally, RBIs have had an almost hypnotic hold on the voters even though they are a team stat greatly dependent on context, by which I mean that Ichiro Suzuki has driven in just 19 runs on a .341 average and 91 hits batting leadoff for the Mariners because he just doesn’t get that many opportunities. Lack of power has something to do with it—he only has two extra-base hits with runners in scoring position—but he is hitting .321 in those situations; it’s just that he’s seen 132 baserunners all season. The top hitters in baseball have seen 200 or more. Cano, who is hitting .373 with runners in scoring position and is a ridiculous 6-for-7 with runners on third and less than two outs (.857!), has seen 195 baserunners.

Those solid numbers, should they endure, will cadge Cano a few votes despite his RBI totals being somewhere behind the leaders. He currently ranks fourth, nine RBIs behind leader Cabrera, as well as Guerrero, Longoria, and Hamilton, but should still sail past 100 very easily. Still, if there is a baseball’s version of Tolkien’s One Ring, it is the Run Batted In, and MVP voters will always slavishly worship before it.

APROPOS OF NOTHING…
The Internet music service I am listening to as I compose these howls (or howl these compositions, something likely to get me thrown out of the Panera at any moment) thinks that Buddy Holly recorded "Earth Angel" and "Johnny B. Goode." I find this symbolic of the 1950s annexation of African American rhythm and blues by white rock and roll artists. The statue of Little Richard points a finger at Pat Boone, and we all weep for Buddy, gone 51 years now (it was a bad year for the Yankees, too).

WINFREE IS FREE
As has been reported all over the place, the Yankees have released Dave Winfree, apparently because he had a "Get Out of Roster Jail Free" card that he could play only on Tuesday. The loss to the Yankees is not great; he was always destined to be a four-corner platoon player at best. His .264/.301/.418 with five home runs was the latest unimpressive line in a mostly unimpressive career, though his small-sample .352 average against lefties leaves hope that he might fulfill that aforementioned platoon role for somebody.

I wonder if Winfree’s bid for free agency would have happened had the Yankees called him up when Marcus Thames went down instead of Chad Huffman. Huffman is certainly the better all around hitter, so you can’t fault the Yankees’ choice. One suspects that when Huffman got the call, Winfree saw where he rated and knew that he wouldn’t be coming up any time soon, if at all.

WHY BOONE LOGAN?
Logan has pitched well in his latest trip back to the sticks, though we’re talking about all of seven innings. Another defrocked reliever, Jon Alabaladejo, seems a much more interesting choice. He’s down to a 1.14 ERA, with 41 strikeouts and 11 walks in 31.2 innings. He has allowed two runs since April and none at all in June. If that doesn’t merit a call-up, I don’t know what does. Hey, Brian Cashman! Here’s your chance to make the Tyler Clippard trade look good! Well, probably not good. How about, "not an entirely lopsided, overly hasty dump of a talented player for minimal return?"

MORE OF ME
Tuesday’s chat transcript can be read here.