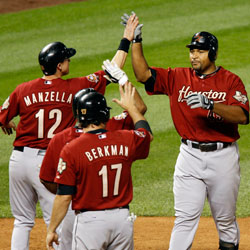 It has been a good June for the Houston Astros. With a record of 17-34 (.333) through the end of May, the team seemed dead in the water. It probably still is, but the lifeless body is still twitching with a little June hot streak against the Nationals, Cubs, and Rockies. Over the ten games they’ve played this month, the Astros are 8-2 with a 3.50 ERA. They’ve walked just under three batters per nine innings and struck out 7.6. On the hitting side, the club has averaged about five runs a game and has hit .273/.328/.410, which doesn’t seem like much, except that (A) this year the NL average team is hitting .257/.329/.402, so they’re a bit above-average, and (B) to that point they had been hitting .230/.282/.325 and averaging three runs a game.

Astros hitters having big months include Lance Berkman, Carlos Lee, Michael Bourn, and Jeff Keppinger, which are all sort of real and possibly lasting, as well as Humberto Quintero and Pedro Feliz, which are as illusory as a pinstriped hippopotamus and twice as transient a phenomenon. On the pitching side, Brett Myers, Wandy Rodriguez, and Felipe Paulino have pitched well, and even Brian Moehler, who is as fringy as they come, has an ERA under 4.00 in two starts.

Normally, you might say that this series would represent no challenge for the Yankees, but with Jorge Posada and Francisco Cervelli slumping , Ramiro Pena subbing for Alex Rodriguez, and Kevin Russo spotting for Brett Gardner, the lineup is a bit short. Add in Mark Teixeira’s mixed month and Derek Jeter and Nick Swisher being on the cool side and you have a lineup that’s pretty much down to Curtis Granderson and Robinson Cano. That could all change tonight, but then again it might not. The Yankees need Gardner back in a hurry so that they can ride out A-Rod’s day-to-day hip flexor problem with a little Kevin Russo on the infield rather than Ramiro Pena. Russo hasn’t hit much, but he should given time.

EYES WIDE BERKMAN
One advantage that this series presents is an opportunity to clap your peepers on Lance Berkman, supposed Yankees trade target, if you haven’t done so already this year. I mentioned above that Berkman is one of the Astros that have had a productive June, and it’s true: he’s hitting .317/.364/.439. While keeping in mind that this is only a ten game sample, note that the rates are a god deal south of his career line. If we pull the camera back to encompass the last four weeks’ worth of games, we see rates of only .245/.349/.340 with just two home runs in 94 at-bats. Berkman missed the first few weeks of the season with a strained groin and perhaps his slow start is attributable to a slow recovery, perhaps to his being 34 and an Astro. When last I discussed him, I mentioned his lack of ideal switch-hittery-ness, with vastly reduced production from the right side of the plate. He’s only had 36 plate appearances against lefties this year, but he’s hit a powerless .206 in them.

If Berkman’s weak performance isn’t enough of a disincentive for the Yankees, Jon Heyman has reported that the acquiring team will have to pick up Berkman’s $15 million option for 2011 in order for the player to give his assent to the deal. In other words, he’s not going anywhere unless the Astros pick up a good deal of the price.