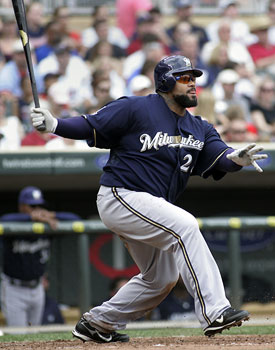 GET HIM NOW OR WAIT ‘TIL YOU GET HOME?
In the coming weeks, as the Brewers sink deeper into the misery of their season, it will become increasingly likely that they will attempt to move their great, big first baseman Prince Fielder, heir to the similarly zaftig former Yankee Cecil "Big Daddy" Fielder. Prince, who is making $10.5 million this year, will be eligible for arbitration after this season and free agency the year after. The Brewers, being, to paraphrase Ray Davies, a cut-price franchise in a low-budget land (and who can blame ‘em?), probably won’t want to pay.

The Yankees currently have a hole at designated hitter; Nick Johnson’s history and the persistent nature of wrist injuries mean that the club can’t bank on his being an effective contributor even after the "official" period of rehabilitation is over. He’s also fairly certain to be bought out of his 2011 option, so he’s not an issue for next year (with just four seasons over 100 games in the last nine years, including one completely missed season, it is hard to imagine Johnson getting much more than a make-good minor-league deal next season). Juan Miranda hasn’t been too exciting thus far, hitting .217/.294/.435 in 51 plate appearances; his minor league record doesn’t augur a great deal more.

Fielder is not having a great year by his own standards, though it’s a little difficult to determine precisely what his standards are. Throughout his five years as a regular he seems to have had an even-odd pattern going, his big years coming in 2007 and 2009 with the even-numbers years being just good. He hits for a reasonable average for a power hitter (.282 career), is reasonably patient (though his 20 intentional walks a year will likely disappear if he moves on), and of course has displaced 50-home run power. A left-handed hitter, he has something of a platoon bias, but isn’t so bad against lefties (.258/.336/.484 career) that you would think about platooning him. He’s not a baserunner and his defensive value is nonexistent. Best of all, he’s only 26 years old. You could trade for him, sign him to a contract of most any length, and be fairly safe—for purposes of this discussion, we are going to assume that Fielder is not Mo Vaughn II and won’t be destroyed by his own massive frame at 30.

If you’re the Yankees and really want to up the ante on what is already a league-leading offense, you might think about making a play for the Hitter Formerly Known As. The difficulty is that for every door you open, you close another. Acquiring Fielder as more than a rental would seem to preclude the offseason acquisition of long-rumored Yankees target Carl Crawford. The Yankees would seem to be well stocked in the outfield to begin with. Brett Gardner hasn’t yet reached arbitration eligibility. Nick Swisher is signed through 2011, and the club holds a 2012 option. Curtis Granderson is signed through 2013, and the club has an option for 2014.

That’s not to say the Yankees couldn’t get better. As much fun as Gardner is, and as valuable as his combination of singles, speed, patience, and defense might be, Crawford offers more. Whether he offers SO much more that it’s worth paying a massive premium over Gardner’s price, assuming that Gardner finishes the season no worse than his current .299/.378/.379 is an argument I’d like to have at some point, but for now let’s concede the point. If the Yankees sign Crawford, either one outfielder continually rotates through the DH spot or Gardner goes back to being a reserve. Having Fielder around, assuming the Yankees would choose to afford both, would remove the rotating DH option.

Tying up the DH spot creates other problems for this year and next year as well. Jorge Posada is signed for another year, and the Yankees will want to keep on making use of his bat while reducing his defensive/health exposure while making room for Francisco Cervelli or Austin Romine (.325/.383/.481 after 40 games at Trenton which is very, very nice given the park—he’s hitting .30/.418/.576 on the road) or even Jesus Montero. Montero has been miserable at Triple-A (.224/.300/.348), but he’s only 20 and has plenty of time to straighten himself out.

Still, Posada turns 39 in August, and all-time Yankees great or not, you don’t pass on important player acquisitions because of an aging catcher-DH. You don’t get too many chances to acquire a hitter like Fielder in the prime of his career—and Fielder is almost three years younger than Crawford and, and rated purely as a hitter (steals included), Fielder is the better producer—especially when you’re always drafting at the bottom of the list and don’t have a great history of finding diamonds in the rough. The price in prospects will determine a lot, of course, but it’s hard to argue against adding a 40-homer left-handed bat to the middle of your order.

I don’t claim to know what the right answer is here. The Yankees could also go for a lower-cost acquisition, like trying to pry Russell Branyan away from the down-and-out Indians. He would fit in nicely with Marcus Thames, but as with Posada, you don’t make your plans around Marcus Thames. Fielder or Crawford or neither: just some of many available avenues in Brian Cashman’s Garden of Forking Paths.

MY BIGGEST PET PEEVE IN BASEBALL…
And once again, Rob Neyer beats me to it: umpires need to enforce Rule 6.02, which says NO timeout calls for the batter once the pitcher begins his windup. You want to speed up the games, you have to force the pitchers to pitch on a timely basis and batters to stay in and hit. Once a batter is in the box he stays in the box, period. As for the attempt to ice the batter or pitcher or whatever the heck the waiting game is about, it has no place in the game. Good for Angel Hernandez for calling it on Carlos Pena last night.

MORE FROM ME
• ... And a lot of other cool people (or people other than me who happen to be cool, which I am probably not): the Yankee Stadium memories book gets a release announcement from the great Alex Belth.