The Red Sox are coming

Share All sharing options for: The Red Sox are coming

WHAT PAUL REVERE SAID, SORT OF: THE RED SOX ARE COMING
On April 19, the Red Sox having lost their fifth straight game, had a record of 4-9. Since then, they’ve gone 23-12 (.657). In that time, they’ve hit and scored 5.8 runs a game, while allowing 4.8 runs a game. Let’s not let those numbers alone, but place them in the context of the AL East (see table at bottom): 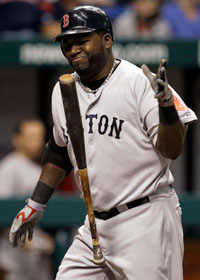 we’re seeing the AL East turn into what we thought it would be all winter long -- a fight between three terrific teams (parenthetically, David Ortiz in May: .368/.421/.809, nine home runs. Holy Turnaround, Batman!), with the added, unexpected twist that the Blue Jays have also played terrifically well. This is in large part due to unexpectedly good offensive performances from players like John Buck, Jose Bautista (leading the league in home runs? Really?), Fred Lewis and Vernon Wells. Wouldn’t it be interesting if the Yankees actually played the Blue Jays this year, being division rivals and all? It’s finally going to happen when the Yankees head over the border from June 4 to June 6.

The takeaway isn’t anything deep, but simply that the division/Wild Card race -- the latter of which is also inhabited by the Tigers (about the only place on Earth still inhabited by Tigers, from what I hear) -- isn’t going to be like last year, when the Yankees had to lick the one opponent in front of them. I know I say this every year, and I say it because I believe it: passivity kills pennants. Fortunately for the Yankees, Curtis Granderson is about 24 hours from coming back, and that should help with the left field problem -- which Kevin Russo could almost make you forget about the last few days. That should solve at least one of two or three problems.

Would that the Yankees would feel comfortable eating the rest of Randy Winn’s $1.1 million and saying, "Y’know, we’re comfortable going with the kid from now on." Russo doesn’t look anything like a polished 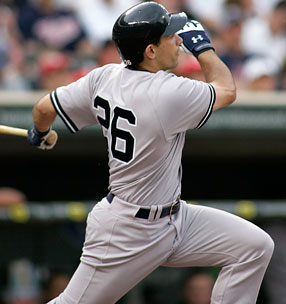 outfielder, but to paraphrase what I wrote when the Yankees brought him up for the second time this year, he’s unlikely to do the spectacular thing, but he’s more likely to do, well, anything, than Winn is. The risk of an occasional missed fly ball seems preferable to the guarantee to a whole lot of outs. The bigger issue is that, even though the Yankees instead return Brett Gardner to left field, Granderson still requires a platoon partner, and Russo might be able to fill that role adequately while Marcus Thames salts his glove and takes his swing as the DH against lefties. In addition, as Russo is an infielder by trade, he would become a better alternative to Ramiro Pena on those days that Coffee Joe wants to give Alex Rodriguez a break (apparently once every 7-10 games). I realize I’m getting jazzed about all of 18 plate appearances, but Russo’s minor league record is clear enough that a .275 average and a .350 on-base percentage isn’t out of the question -- more than the Yankees will get out of Granderson against lefties. There are other alternatives, of course, as long as Granderson is protected from lefties and the team is protected from him against lefties. If Girardi has to sell it "for his health" as Granderson continues his recovery, so be it.

The larger problem is the bullpen, which might finally be coming into focus with a seven-game scoreless streak for David Robertson (though he has still passed five in 8.1 innings, too many). Deposing Boone Logan for Chad Gaudin is one attempt at solving things, and though Voltaire said we must cultivate our Gaudin, we must see if Gaudin can solve the homeritis that got him chased from Billy Beane’s bay. One suspects further moves, and there are interesting candidates at Scranton should Brian Cashman choose to embrace them. As for extra-organizational arms, they’re not going to come into focus for a while, but when you look at the relievers both having good seasons and pitching for non-contenders, it’s not clear that the likely possibilities offer any kind of guarantee over just giving a kid or organizational soldier a chance.

TOTALLY RANDOM THING I HAPPEN TO BE THINKING ABOUT

How is it the Beatles covered the Cookies "Chains," on their first album but never got around to "Don’t Say Nothin’ Bad (About My Baby)?" And is the original "I’m Into Something Good," by a former member of that group better than the better-known cover by Herman’s Hermits?

• New DPOTD over at BP, Pinky Higgins, most evil of the Red Sox.
• Wholesome Reading has been updated, with more to come shortly.