LONG TALL SALLY HAS LOST HER SPEED
It seems like the off-day brought a great many "Has Derek Jeter lost his groove to age?" articles -- we’ve got to fill column inches, or gigabytes, or whatever it is we online cats do. While worries about Jeter’s age are realistic and 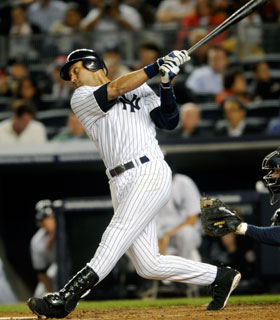 highly relevant given his contract situation, it’s a bit premature to write him off given that just over a quarter of the season is in the books. We can also accept the evidence of our eyes, bolstered by statistics; it doesn’t look like Jeter is slowing down, it looks like he’s confused. In recent weeks, the boundaries of his strike zone have expanded. He has hit more balls on the ground -- his groundball/flyball ratio is at a career high -- which is a hard way to hit safely, as even Brett Gardner is finding out lately with his seemingly endless series of 5-3 groundouts; Jeter’s batting average on balls in play is at a career-low .302. The number of pitches he’s seen per plate appearance this season is nearing his career low of 2004.

This may all be due to aging, somehow, but it’s not obvious. It seems more symptomatic of a batter who is uncharacteristically lost, and what is lost can also be found. Certainly, Jeter’s .330/.354/.521 April should count for as much as his .224/.290/.276 May. Putting aside for the moment the possibility that he’s concealing an injury, it seems unlikely that he aged dramatically between the last day of April and the first day of this month. Again, he’s putting a lot of balls on the ground right now, and when you do that, a great many things don’t happen: you don’t hit for a high average, because most grounders are outs, you don’t hit for extra-bases and you don’t hit home runs, because it takes a nigh-miraculous set of circumstances for a groundball to go for four bases.

Unless there’s some aspect of being 36 that prevents Jeter from rediscovering his patience and getting some lift back in his swing -- and we would call that an injury, which brings us into the realm of conspiracy theory -- there’s every reason to think that he can come back. How far he comes back, how he finishes this season, that’s a different question. Two years ago, Jeter had one of the worst offensive seasons of his career. Last year, he had one of the best seasons ever by a 35-year-old shortstop. Some regression was a near certainty. Unless Jeter possesses, in addition to his myriad other skills, the secret formula for age retardation, his skills are going to erode at some point. Based on the evidence, it doesn’t seem as if that moment is now, and what ails Jeter is just your garden-variety slump, but time will tell.