The transformation of King Midas

Share All sharing options for: The transformation of King Midas 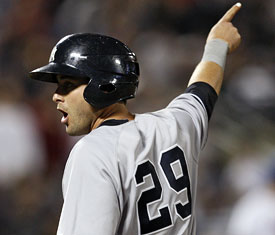 Instead of fretting too much about what was a very bad weekend, let’s look on the bright side for a change. Francisco Cervelli has an amazing, nigh-unprecedented ability: everything his bat touches turns into a hit. His nickname shouldn’t be Frankie, it should be "King Midas." King Midas Cervelli is batting .354 overall and .403 on balls in play. This is clearly the supernatural at work.

I’ve observed before that Cervelli’s Minor League track record was both limited and not terribly impressive. The native of Venezuela hit just .273/.367/.380 in 221 games, his training period having been attenuated by injuries and call-ups. The on-base percentage suggested he knew a little something about the strike zone, but not in the Ted Williams sense of knowing something about the strike zone—if his Minor League walk rate had followed him to the Majors without any reduction, he would have been due for about 50 walks in a 500 plate-appearance season. That’s something like average selectivity.

For hitters without power who don’t happen to have an incredible batting eye, their Minor League walks don’t come with them. Major League pitchers are quite good at the whole location thing and are quite happy to challenge batters who aren’t likely to hit the ball out of the park. Last year, Cervelli’s 101 plate appearances seemed to suggest that his patience was not going to survive his inability to put the ball over the fences, no matter that he made good contact and had good luck on balls in play. He saw ball four just twice all season, and averaged 3.3 pitches per plate appearance. He was eager and pitchers went right after him.

Cervelli’s approach has changed this season. He’s been more selected, increasing his pitches per plate appearance to 3.5. That may seem like a minute improvement, but selectivity is measured in tiny bits, in an extra pitch taken here and there. Last year, Jayson Werth topped regulars at 4.5 pitchers per PA, while Bengie Molina trailed the universe at 3.2. That’s the difference between Werth’s .373 OBP and Molina’s .285: looking at one pitch—just one!—per trip to the plate. Cervelli’s fraction of an extra pitch means that he’s walking nine percent of the time, close to his 11 percent rate in the Minors. He’s also having good luck, as his .403 BABIP testifies. However, it is also possible that not only is he blooping his way to a good average, as I suggested here last week, but that as a result of being just a little bit more selective he’s also choosing better pitches at which to take his hacks. The combination of patience and good luck is pretty hard to beat. As the old saying goes, it’s better to be lucky than good, but if you can be lucky AND good, you’ll have the world on a string.

Even when Jorge Posada comes back, the Yankees may have to play this guy. A player can have good luck over a full season. While the average player will hit about .300 when he makes contact, last season 32 players with 200 or more plate appearances batted over .350 on balls in play, the King Midas crown going to David Wright, who hit .394. In 2008, 22 players were over .350 when they put the ball between the lines, led by Milton Bradley at .388. In 2007, Matt Kemp led with .411, albeit in only 311 PA; B.J. Upton led full-timers at .393. Most of those players had line drive rates far in excess of Cervelli’s, which suggests that his lucky bloop factor is high.

Still, you can’t know how long his luck will last, and should it persist through the time of Posada’s return, the Yankees should probably keep on riding it. After all, Cervelli is a better defensive catcher than Posada. This would have been something of a moot point had Cervelli hit down to expectations, but as long as he remains hot and the Yankees are in need of a DH, well, welcome to the best of all worlds. Posada can still have a job when he returns, one that will carry him into the last year of his contract and the possible emergence of Austin Romine and Jesus Montero next year; Cervelli would continue to catch; Juan Miranda can watch from the bench.

Consider what the Rays have done with their ostensible reserve catcher, John Jaso. Jaso batted third on Sunday. After a 2-for-4 with a triple and a home run off of various Astros humpty dumpties, Jaso is hitting .349/.475/.540 in 80 plate appearances. Jaso didn’t even make the roster out of spring training, having been third on the organization’s depth chart behind Dioner Navarro and Kelly Shoppach. Navarro has opened this season with a sequel to his acclaimed 2009 drama, "Frailty, Failure, and Futility (A Musical)" hitting .188/.270/.238 to date. Between the two seasons he’s hit .213/.263/.307 in his last 501 plate appearances. Shoppach underwent knee surgery in mid-April and will be out until sometime in June. Jaso, recalled in desperation, has taken control of the job, grabbing the long half of a platoon with Navarro.

As with Cervelli, Jaso has no record of being this good, though he’s probably a better hitter than Navarro on any day of the week. A .291/.379/.438 hitter in 623 Minor League games, Jaso is already 26, so he likely is what he is. Fortunately, what he is includes a good sense of the strike zone, so even when he cools he should still reach base reasonably often. It’s somewhat less likely that he retains his power, though he won’t be as light a hitter as his Yankees counterpart. Still, he’s hitting, the Rays have a need, and Hi-Yo, Silver.

Just as Jaso can’t be expected to hit this way for much longer, Cervelli will likely cool. Even with his newfound patience, a Cervelli who hits like a slow Brett Gardner is only going to make moderate contributions to the offense and might not survive a challenge from Romine in the long term (Montero’s future remains difficult to project). At that point (assuming it is at some point after Posada returns—this being a well-ordered universe we are imagining, where things happen in neat and convenient sequence), the Yankees can reevaluate the catching situation. Until then, lead on, King Midas.

MY WEEKEND FROM (DRAG ME TO) HELL
As part of a recurring feature in my life, Steve’s Insomniac Theater, I watched a pathetic four movies this weekend. You can do that, get in all of your work, hang out with your kids, get stuff done around the house, take your folks out to dinner, and watch three Yankees games, if you simply give up sleeping. Three of my four choices were random, chosen because they were what was on cable at the time. The fourth was a DVD I picked up used and had been meaning to watch for awhile based on what I dimly recalled to be a positive critical reception. I went 1-for-4 in my selections, or maybe 1-for-3 with a HBP. Of the four, I thought one was just an unredeemable failure, though memorable; another was amusing, but like an empty-calorie dessert which feels good going down, but after the fact you wonder why you enjoyed something so useless; another wasn’t as compelling as I’d heard, though I liked the lead actor; another was actually kind of nicely constructed and really well-acted. I’m going to tell you the titles, but I’m not going to say which was which. The four: "Observe and Report";"Drag Me to Hell"; "The Hangover"; "Before the Devil Knows You’re Dead". …And I still haven’t seen "Avatar."

MORE FROM ME
• I continue to update Wholesome Reading for your entertainment, edification, and occasional annoyance. Warning: politics, things befouled by oil.

• There’s a new Dead Player of the Day up at Baseball Prospectus.

• BP started a new podcast series on Friday and I dropped in on the first episode to talk about managers.