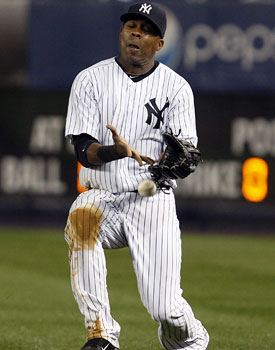 THAMES GIVETH, THAMES TAKETH AWAY, THAMES SENDS FLOWERS
I know I’ve been kvetching about the composition of the Yankees’ roster for awhile now, but it remains an important issue, something that Tuesday night’s game amply demonstrated. With 13 pitchers and two injured regulars on the bench, Joe Girardi had absolutely no flexibility in the crucial ninth inning. Could he put in a defensive substitute for Marcus Thames in the top of the inning? Pinch-hit for Francisco Cervelli, Thames, Juan Miranda, or Randy Winn in the bottom of the inning? The answer to all of the above was no. What he could do, and did, was pinch-run with Ramiro Pena and enjoy the company of Mark Melancon, who wasn’t used, and Boone Logan, who is left-handed and therefore gets to stay on the club without anything like a defined role. Herbert Hoover was left-handed as well, but you wouldn’t have him cluttering up your 25-man roster.

Whatever the transient problems of Jorge Posada and Nick Swisher, the present roster composition, which is going to have to endure for, at the very least, for the next two weeks while Curtis Granderson continues to heal his groin, is not sufficient for the team’s needs. A baker’s dozen is a good thing if you’re picking up cupcakes at Magnolia Bakery, bad if you’re dealing with pitchers. As with any other congeries of randomly assembled parts, chances are you’ve thrown some items into the box that you can’t actually use and left out some that you can. Greg Golson is not a Major-League hitter and there is a 90 percent probability that he never will be, but if you’re in the position of utilizing Thames as an outfielder, you probably need someone like him on the roster.

Conversely, as we’ve discussed before, Pena may be a Major League fielder, but if your utility infielder is going to play regularly because your infielders are going to get frequent turns as the DH, his lack of bat becomes a handicap. If you’ve decided that you have to give Randy Winn playing time due to injury ("decided" because no one really HAS to give Randy Winn playing time; it’s just something you start doing, like smoking), having some kind of pinch-hitter around has to be part of the plan, because this year’s Winn looks like last year’s Winn, and last year’s Winn couldn’t hit enough to play for the Giants. Have you seen some of the hitters the Giants are willing to play? They make Enrique Wilson look like Honus Wagner.

Parenthetically, if the Marlins are willing to trade Hanley Ramirez due to the little spat he and Fredi Gonzalez have been having, I would like to be the first to officially extend an invitation to New York—and not the Mets. And perhaps, Marlins, you fellows would be willing to throw in a reliever or two, maybe Leo Nunez (nothing happening here that didn’t happen 30 years ago with Reggie Jackson). Anything to help you solve your personality problems and our age/brittleness/fickle reliever problems. One hand washes the other…

Yes, it’s a pleasant dream, but no more than that. Thus, the Yankees will still be aged and brittle as they take on the universe-leading Rays, who lead the stripped Pinstripers by three games. The fascinating aspect to the Rays’ season is that they’re something of an offensive disaster area, but are winning better than 70 percent of their games anyway because their pitching staff seems to think that they are actually the 1906 Chicago Cubs. I have it on good authority that when Matt Garza passes James Shields in the clubhouse, he says, "Hi, Orval!" and Shields answers, "Hi, Mordecai Peter Centennial ‘Three Finger’ or ‘Miner’ Brown!" It’s like a case of possession—Tuesday night, Jeff Niemann was seen at a Pennsylvania polling station trying to cast a vote for William Howard Taft. In this series, the Yankees will see Shields and Wade Davis, the Rays starters with the highest ERAs at 3.00 and 3.38, respectively.

The offense is also channeling 1906, but only in the sense that the Rays have hit like they’re playing in the Deadball era. Evan Longoria is playing up to the MVP-award level that many predicted this season, Carl Crawford is doing what it takes to keep Brian Cashman’s saliva level up, Reid Brignac is showing that he could be a nice, punchy add-on in the middle infield, and John Jaso has demonstrated that there is more electric current in his bat than animates Dioner Navarro’s whole body. The rest of the lineup… How do I put this? What is the English word for "thhhhpphhhht?" Ben Zobrist, who had a fair claim on the AL MVP award last year, has yet to hit a home run. B.J. Upton looks ready for retirement at 25. This is a team that brought up Hank Blalock because he seemed more likely to produce than anyone they currently have on hand. This is a guy whose 2009 on-base percentage was .277, even lower than Randy Winn’s.

This brings us back to the Yankees’ roster. Playing the best team in baseball requires more tactical flexibility, not less. Tuesday’s ninth inning was a disaster because Girardi had few options. He had to ask Thames, a strikeout artist, to deliver a sacrifice fly. He had to ask Miranda to do the same. He had to ask Winn to hit. Prior to that, he had to ask Thames to make a moderately difficult catch in the outfield. Not all of these problems are easily solvable due to injuries right now, but they could be somewhat mitigated with a cannier arrangement—one fewer pitcher for starters, and then some of the more potent reserves from Scranton, more potent than Pena and Golson, at any rate. No reason to give the best pitching staff in baseball, perhaps in years, so many soft at-bats if you can do anything to avoid it, and the Yankees can.

Last note: no need to give them extra help in the late innings either. Given the way the Yankees bullpen has performed of late, it’s time (as long as he’s here) to start taking Melancon seriously.