And the Thames flows on to the sea

Share All sharing options for: And the Thames flows on to the sea 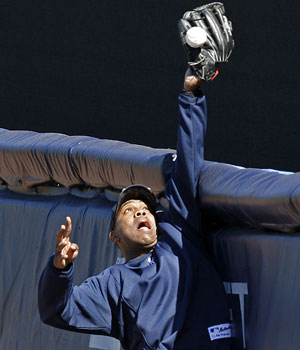 The Yankees’ roster has more or less taken shape now. Specific bullpen assignments have yet to be determined, but it might be a month into the regular season before the best configuration identifies itself to Joe Girardi. The left field platoon seems set, with Brett Gardner and Marcus Thames—sort of. Thames hasn’t hit at all this spring, and though the pointless Jamie Hoffmann has been dispatched back to the Dodgers, as Chad Jennings reported, Brian Cashman is keeping his eyes open:

"He was brought in to complete for the spot, and right now he’s the last man standing, so to speak… But that doesn’t mean he’s not still needing to compete for that because I don’t know what’s going to become available between now and the end of camp."

Cashman is correct to be scanning the waiver wire. The next five days are crucial, as March 31 is the last day that a team can release a player without having to pay his full 2010 salary. It’s not exactly likely that a virile lefty-masher will suddenly dropped onto the open market, but given that Thames isn’t a defender, it might be worth sacrificing some of his power to get a more rounded player, one who can run and catch as well as hit.

Thames has gone 3-for-32 this spring (.094) with no extra-base hits, one walk, and 13 strikeouts, that last a 200-K pace for 500 at-bats. Normally, you could dismiss such small-sample struggles from a veteran hitter, but as we’ve discussed before, Thames disappeared in the second half of last season. This was partially attributable to his being squeezed out of playing time by Carlos Guillen, but .234/.309/.351 over 110 plate appearances from a player whose only skill is hitting home runs is pretty difficult to take regardless of the ostensible cause. Throw in the Spring Training at-bats and you have a more sustained spot of badness, albeit one that still qualifies as being too small to allow for any definitive conclusions.

One interesting factor here is Gardner. Last year (and this too represents too small of a sample, but let’s play) he hit .291/.381/.400 against lefties (65 PAs). With his speed and defense, that’s good enough to play. Before he is automatically consigned to the platoon pile, it’s worth seeing what he can do against most lefties. Most of them are not Randy Johnson in his prime. You would also hope that a couple of years of hanging around Johnny Damon and Hideki Matsui, two left-handed hitters who did an excellent job of facing southpaw pitchers almost head on so as to get a better look, might have rubbed off.

If the Yankees are going to platoon, getting production is obviously important—the short half will likely get around 40 starts. Whether that hitter is Thames or not is in many ways not terribly interesting. The platoon advantage for a right-hander versus a left-hander is almost universal. Last year, the average AL hitter hit .267/.336/.428. When facing a left-hander, the average right-hander hit .271/.344/.435 with a home run every 30 at-bats. Thames is a career .256/.329/.516 hitter against lefties, with a home run every 16 at-bats. Thames’ power is obviously valuable, but if for some reason his bat has gone to its final rest, the Yankees should be able to get reasonable production by plugging in almost anyone… except Jamie Hoffmann.

MORE FROM ME
• A week from today I’ll have a chat at Baseball Prospectus (1 p.m. EST). It’s open to all, and if you can’t make it you can leave your question ahead of time.

• Wholesome Reading has been updated, with more to come throughout the weekend. Warning: politics! (No animals harmed.)