And then there was one

Share All sharing options for: And then there was one

THE RIGHT STUFF
The Yankees made the best of a difficult choice in selecting Phil Hughes to be the fifth starter. The difficulty comes from both pitchers being promising young starters, both 24 this season, who have had Major-League success in the past. In an ideal world, the team would have room to put them both in the rotation and see who emerges -- not from 6.2 or 14 Spring Training innings -- but from a full season. 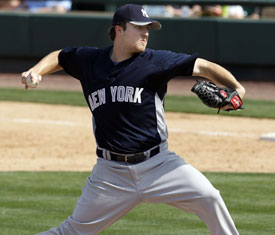 However, once the Yankees made the entirely defensible decision to bet on a known quantity and re-sign the soon-to-be 38-year-old Andy Pettitte as well as grabbed the low-hanging fruit that was Javier Vazquez from the Braves, suddenly there was room for just one.

The results of Spring Training would normally be too small to inform such a significant decision, but when combined with last year’s results, they create a basis for making a judgment about the relative merits of Mssrs. Hughes and Chamberlain. Simply, Chamberlain is damaged goods, tarnished by the .316/.397/.515 pounding he took in August and September last year. Even if the Yankees were instigators of this struggle with their inconsistent handling of the pitcher, there was also his declining velocity, his wildness and the way he seemed liberated by his postseason bullpen stint. To that we can add his problems to his spring. Though Hughes struggled in the postseason, those six innings speak less loudly than a year of successful growth and a solid Spring Training, half a million home runs allowed to the Phillies notwithstanding.

It is assumed that Joba will now slide into the eighth-inning bullpen role he performed so well in the past. I remain skeptical. He was clearly more effective in the postseason, with increased velocity, but he was hardly dominant, allowing nine hits in 6.1 innings. He may get the role out of Spring Training, but he won’t necessarily hold onto it. Something is happening, and just like Dylan’s Mr. Jones, we don’t know what it is.

HE’S NOT OUR MANAGER ANYMORE
Albert Einstein visited this country when it was struggling to deal with the fallout from the misguided proscription alcohol. As he arrived, reporters asked the brilliant man what should be done about the terrible state the country was in as a result. "That’s your problem," Dr. Einstein said, "not mine."

The same can now be said of Dodgers manager Joe Torre, who today named journeyman Vicente Padilla his opening day starter despite the presence of, among others, Chad Billingsley and Clayton Kershaw on the staff. I suppose it’s just one day, but as with his ham-fisted handling of Alex Rodriguez, one has to wonder if Torre’s touch has deserted him. Padilla can do anything short of throwing 30 shutouts this year and he will still be a footnote in Dodgers history, whereas Kershaw and Billingsley will be the heart of the franchise for years (barring injury, comets, the return of the dinosaurs, etc, etc). Way to show your confidence in them, Joe. Some things never change. From the day he became a manager, Torre loved his veterans and he still loves them, even when that love is self-destructive. I feel the same way about cookies, cakes and other desserts, so I can empathize.

THE ATHLETICS TRADE FOR EDWAR RAMIREZ
Ramirez has finally landed in one of the few parks his fly-ball lovin’ ways won’t absolutely kill him in. Now all he has to do is get the ball over the plate.

YOJIMBO
In response to a great many tweets a few days ago, I finally got around to watching Kurosawa’s samurai western "Yojimbo," a copy of which I have had hanging around the house since we founded the homestead back in 1852. Tishiro Mifune was spectacular, the rest of the cast mixed. The villains were so broadly drawn, and the protagonist so far ahead of them, that the film lacked tension. To some degree this was intentional, the director lulling you into a false sense of confidence so that later plot turns have more impact, but it still requires some patience to get to that point. The comedy relief, which veers between the punchy John Ford style and horror, helps quite a bit. The further I get away from the picture the more I like it, especially Sanjuro, the protagonist. I’m happy that Kurosawa made a sequel, but also saddened that he didn’t make about five more after that, because I want to see more adventures of this character. And no, Clint Eastwood’s Man With No Name, modeled on Mifune’s Sanjuro, doesn’t quite do the trick. For more (with a great many spoilers) see Roger Ebert’s essay.