Share All sharing options for: Going five-hole with Robinson Cano 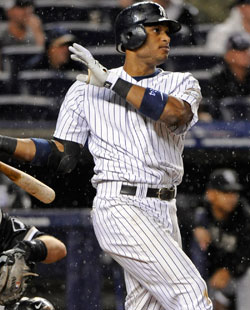 In 1989, Rangers manager Bobby Valentine employed an unorthodox batting order. He led off centerfielder Cecil Espy, whose main skill was being fast. His second hitter was usually shortstop Scott Fletcher, who was an exemplar of the traditional number-two type. He didn’t hit much, but he drew a few walks, was tough to strike out, and if he wasn’t fast, he wasn’t slow either. Rafael Palmiero, not yet a power-hitter (he would hit eight home runs that year) batted third until Harold Baines came over at the trade deadline. Ruben Sierra, then 23, batted fourth every day and had the best season of his career.

In the fifth spot, you might have expected that Valentine would have used Pete Incaviglia, his 25-year-old, slugging leftfielder. Sure, Pete struck out like crazy; having gone directly from the campus of Oklahoma State University to the Majors, he never did pick up the finer nuances of the game. Still, the fifth spot was traditionally the place that the Inkys of the world got to hit. It was where you were supposed to put your second-best slugger, the guy who hit for power but wasn’t as refined as you cleanup guy.

But no, Incaviglia spent the year batting sixth or seventh. Valentine’s everyday fifth-place hitter was second baseman Julio Franco. The Dominican infielder with the unusual batting stance had hit .295/.344/.394 to that point in his career, and had averaged over .300 for three consecutive seasons. It was a pretty average to be sure, but as the slugging percentage suggests, he was in no way a power hitter. He had hit 28 total home runs over the three previous seasons. Due to a ground-ball-oriented approach, he didn’t hit very many doubles or triples either, but did hit into a great many double plays.

Still, the choice made a certain amount of sense on paper. As Bill James pointed out at the time, if the cleanup hitter comes up with a runner on second and first base empty, prompting the opposition to pitch around him, there is utility in having a .300 hitter coming up next instead of a power hitter, because a single will score the runner on second most of the time.

The problem is that this emphasis ignores the main function of the batting order. Creating neat-o interactions between hitters and runners is a secondary function of the lineup; these situations only come up so many times over the course of a season. The primary purpose of the batting order, which is to distribute playing time in the form of plate appearances, giving the most exposure to the team’s best hitters while minimizing the poor ones.

Valentine’s batting order failed to do this, because it put Espy in the leadoff spot, and Espy couldn’t hit. As you surely know by now, over the course of the season the leadoff spot bats most often, followed by the second spot and so on. Here’s how the distribution of plate appearances broke down for the Yankees last year:

Here’s the complicated part: although the Julio Franco part of the batting order should not be primary, a manager also can’t ignore it completely. You want your best hitters to bat most often, but if you bat Albert Pujols or Mark Teixeira in the leadoff spot, what you’re going to get is a lot of solo home runs. If you end up batting .257/.313/.331 Cecil Espy ahead of .316/.386/.462 Julio Franco, you’ve failed on both counts.

This lineup flashback comes courtesy of the apparent decision to bat Robinson Cano fifth. On the surface, this would seem to bear a superficial resemblance to the Julio Franco decision -- "Hey, let’s get a high-average guy up there to protect A-Rod and Teixeira!" but it’s not nearly the same thing. Forget Cano’s problems with runners on base, which have lasted the length of his career, not just last year. The issue is his on-base percentage. Cano isn’t nearly as good as his batting average makes him look because he’s so darned impatient.

Cano’s batting average ranked sixth in the league. His True Average (formerly Equivalent Average) of .293, which measures the sum total of his contributions on offense on a scale identical to batting average, ranked only 29th among players with 400 or more plate appearances. Among those finishing ahead of him: Jorge Posada (.301) and Nick Swisher (.300). You really don’t need the statistics to appreciate the basic reality of this: Posada and Swisher simply reached base more often. Unless Cano hits .350 this year or learns to take a walk, both spectacularly unlikely, and assuming business as usual on the part of either player, they are going to reach base more often this season.

Given the purpose of the batting order is to promote offensive production, what purpose is served here? Over the course of his career, Posada has been the superior hitter with men on, and his career OBP stands at .379. Like Cano, Swisher struggled to deliver baserunners to the plate, but still reached base 40 percent of the time in those situations. His strikeouts, viewed as an annoyance by the less sophisticated fan, meant he hit into a double play in only 11 percent of opportunities vs. 17 percent for Cano. Posada, despite his typical aged catcher legs, hit into a twin killing in only 14 percent of his opportunities.

We also haven’t considered another possibility, which is that not only does Cano not hit .350, he doesn’t hit .320 again either, instead falling back to his career averages of .306/.339/.480. Were he to do that, his OBP would barely escape the league average.

Perhaps Joe Girardi, master motivator, super psychologist, leader of men, is simply trying to boost the easily distracted Cano’s focus and confidence with this move, but even a Cano that doesn’t hit first-pitch pop-ups to left field is not going to turn into Rogers Hornsby. Cano has value, but he’s not a top offensive performer and almost certainly isn’t going to be one. Girardi may have allowed himself to be blinded by that flashy batting average, forgetting that the most important factor is reaching base.

Parenthetically, in 1991, Franco won the batting title for the Rangers, hitting .341/.408/.474. He spent the season bouncing between the second, fourth, and fifth spots and drove in 78 runs. The Rangers had the best offense in the league that year. Valentine led off Brian Downing, a slow but highly selective hitter, mixed in a blossoming Palmiero in the second and third spots, shifted Sierra between third and fourth, and when Franco wasn’t hitting fifth, had Juan Gonzalez and Kevin Reimer bat there, both exemplars of the traditional number five hitter. The lineup was basically sorted by on-base percentage, and it worked just fine.

MORE OF ME
Spent the weekend in darkness bailing water out of my flooded basement, but still managed to get a few things in at Wholesome Reading. Warning: Politics (and stained chairs)!