Deja vu all over again: Farnsworth blows save, game in 4-3 Yankee win

Share All sharing options for: Deja vu all over again: Farnsworth blows save, game in 4-3 Yankee win

Who thought Anthony Lerew would pitch as well as A.J. Burnett? You'll have to count me as someone who didn't.

The score was tied at one in the seventh, with runners on first and second, when Phil Coke made two bone-headed errors. He fielded a comebacker and threw wide to second base, causing a run to score and all the runners to be advance. In the very next AB, he again fielded a comebacker, and instead of throwing home (where the runner would've been out by 30 feet), he threw to first and KC took a 3-1 lead. On the bright side, it's better to get this BS out of the way now. It's hopefully a lesson learned for Coke.

Kyle Farnsworth one-upped him in the ninth, allowing three hits and a sac-fly to let the Yanks comeback for their 15th walk-off, pie-in-the-face win.

Frankie Cervelli and Eric Hinske singles led to Robbie Cano's game-tying sac-fly. Hinske miraculously stole second, then advanced to third on the throw that skipped past the covering shortstop. Following that, Juan Miranda lined a pitch off Farnsworth's leg that rolled toward the Yankee dugout - both the pitcher and first-baseman chased it and no one covered first (though it probably wouldn't have mattered).

It was great to see David Robertson again - he threw .2 innings with a walk and a strikeout in his first game since September 5.

Burnett definitely made a strong case to take the second spot in the playoff rotation: 6.1 ip, 1 er, 3 h, 3 bb, 8 k. If the Yanks play the longer ALDS, they could start Burnett this Sunday, and then again on normal rest in game two of the playoffs. Do they give him a lot of extra rest, or throw him out there one more time (probably in a shortened outing)? 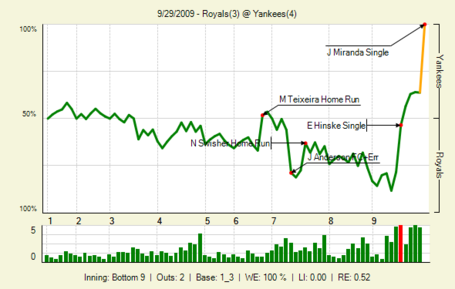