I over-relaxed and fell asleep sometime after Cano's grand slammer. But before that, it was a fun game to watch. It was close, both pitchers were pitching rather well, and the Yankee young'ns were showing their prowess. Frankie Cervelli and Ramiro Pena went 4-8 with two XBH, two RBI and three runs. Pena had his first career big league homer, so of course the Yankee regulars gave him the cold shoulder when he came back to the dugout (engineered by A-Rod), only to explode moments later in a fit of joy as they congratulated the rookie on his milestone.

Chad Gaudin has given the team way more than it expected when he came over as a possible fifth starter - 6.2 ip, 2 ER tonight drops his ERA to 4.68. 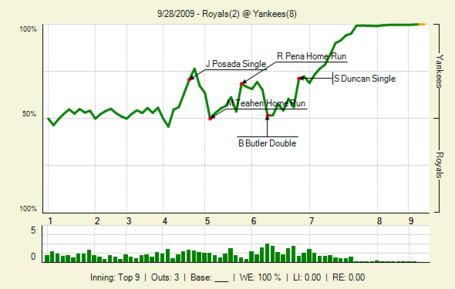