The ugly way the Yankees played tonight will get overshadowed by the eighth inning brawl.

The Yanks out-hit the Jays, 15-13, but Sergio Mitre thew batting practice, allowing a career-high four homers against none for Roy Halladay.

The fight went down as such: Mark Melancon hit Aaron Hill square in the back in the seventh inning (probably unintentional). In retaliation, Jesse Carlson threw behind Jorge Posada (certainly intentional), who had some words for the pitcher. Posada walked and came around to score on GGBG's double. As he crossed homeplate, he sort of bumped elbows with Carlson, and then it's unclear what exactly happened next. They never showed Posada's reaction to that, so I can only tell you what Carlson did: he turned and yelled something at Posada, who then came back and went after Carlson. It was nearly impossible to tell what happened in the middle of those 60 players (remember, being September, there were extra players surrounding the fight, making it impossible to discern what was occurring). What could be seen were Girardi's crew cut in the middle and (of course) Shelley Duncan wrestling with catcher Rod Barajas on the ground. The after-effects were evident: Carlson had a nasty bruise on his forehead, Girardi has a small cut on his ear and a potential shiner in his left eye, and CC Sabathia was rubbing his head. Posada seemed unhurt.

The brawl was reminiscent of the Knicks-Heat fight from years ago where Jeff Van Gundy got right in the middle and was hanging on for dear life. Joe Girardi was right in the midst of this tussle, trying to break it up to prevent ejections and injuries. The Yankees have a lot more to lose at this point than Toronto. Posada may well get suspended for several games. We should just hope no one is hurt.

It's what we should have expected. Mitre was Mitre, a replacement level pitcher. And to get 11 hits off Halladay was an accomplishment in and of itself, but the Yanks just couldn't get the big one (5-16 with RISP), leaving 12 runners on base.

Nick Swisher over-leaped a short-porch homer. He climbed nearly into the stands but the ball hit right on top of the wall (and about three feet to his right), bouncing into the stands.

A-Rod was thrown out at home on a fine play by rightfielder Jose Bautista and catcher Rod Barajas. Just one of those plays where it needs to be a perfect throw and a perfect tag, and it was. You can't fault Alex or Robby Thompson for that. 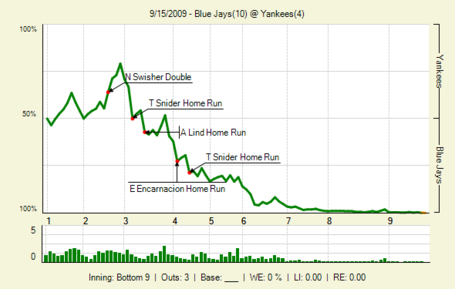