Share All sharing options for: Yankees rough up Weaver (again) in 5-3 win

A good all-around win for the Yanks. They pitched well, hit just well enough, and made a few plays in the field that kept Anaheim off the board.

The bad news is Phil Hughes is starting to look 'vincible' in the bullpen, but the good is Nick Swisher's starting to hit at home. He's quietly become second on the team in homers with 27, trailing only Mark Teixeira's 35.

Tex was the offensive hero: he went 3-4 with two XBH's and two RBI.

It's going to be a tough centerfield decision come playoff time. Does Girardi keep Brett Gardner on the bench for situations like tonight? Or he does he want him getting four ABs and playing great defense all game?

Vlad Guerrero's second inning homer broke the record for long-balls at Yankee Stadium, surpassing the old mark of 215 set in 2004. It was the only run Joba Chamberlain allowed in four innings of work, his best start since the end of July.

Mariano's 2-2 pitch to Chone Figgins in the ninth was probably an inch or two off the plate, and homeplate umpire Derryl Cousins called it a ball (Figgins would eventually walk). My problem with that call is that Cousins called many strikes throughout the game on pitches that were considerably more off the plate than that one. Consistency guys! 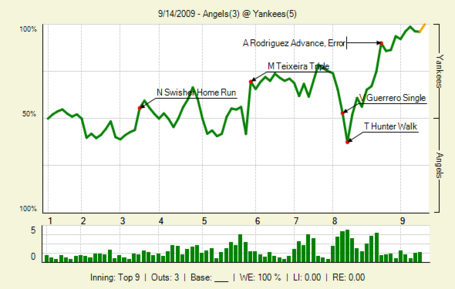