Burnett (5.1 ip, 5 er) continued his inconsistent streak. He could never really command any of his pitches. He only walked two but was constantly falling behind on hitters which is why he allowed 11 hits.

The Orioles' David Hernandez was just as bad, giving up five runs in six innings with six walks and three homers.

The big blow was a Jorge Posada two-run jack that gave the Yanks a 5-3 lead. However, it looked like Burnett may have given the game away when he served up a Luke Scott three-run homer, but the Yanks came right back to tie the game on a two-out RBI single by A-Rod. Then the Yanks broke it open the next inning with back-to-back homers from Nick Swisher and Eric Hinske.

Damaso Marte, Dave Robertson, Phil Coke and Mo Rivera shut the door after the fifth inning. They combined for: 3.2 innings, 0 r, 2 h, 0 bb, 2 k. It was a little surprising that we didn't see Phil Hughes: it was a close game and he hadn't pitched in two days. 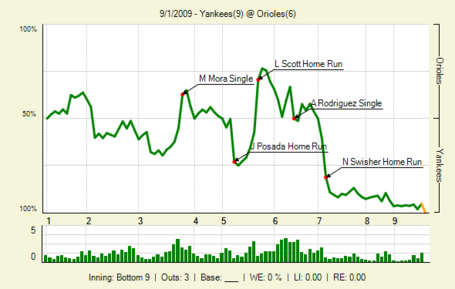