At this point, I'll take it. It wasn't a very good performance from Joba, but it didn't really matter as John Smoltz was much, much worse. It looked like it might be another disappointing night when Casey Kotchman hit a two-run Yankee Stadium Special into the rightfield stands, but the Yankee hitters were quick to respond, jumping on Smoltz for eight runs in the bottom of the fourth. The big blow was Melky Cabrera's 11th homerun, a three-run shot, giving the Yanks a 5-3 lead.

Boston tried to mount a comeback in the top of the fifth, but fell short when Joba Chamberlain escaped a bases-loaded jam by striking out Nick Green.

What you've got to love about winning this first game is it guarantees the Yankees are still in first place on Monday, no matter what happens the rest of the series.

Joba's biggest problem was control: he walked seven batters, and threw 108 pitches in five frames. How much of that was due to a seven-day layoff and a 38-minute fourth inning - who knows? But he was better than Smoltz, and that's all that matters.

Nick Swisher had a perfect night, reaching base four times in four PA (two hits and two walks). Posada, Damon and Tex had three hits each.

Yankee pitchers walked 12 Red Sox. They largely got away with it, but they can't live that dangerously for long. 'Big Mammi' himself went 0-5 with nine LOB.

The Sox are now closer to the Rays than they are to us. 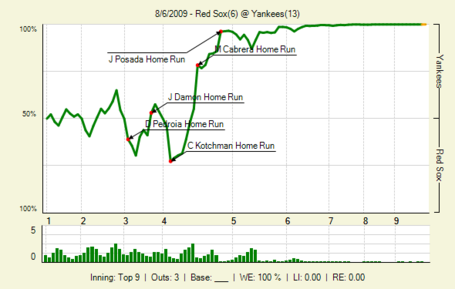