Near perfect, Pettitte has best start of the year in 5-1 win

Share All sharing options for: Near perfect, Pettitte has best start of the year in 5-1 win

Oh, Jerry, what could have been...

Andy Pettitte was cruising, having thrown 6.2 perfect innings before Adam Jones came to the plate. He hit a fairly hard grounder to third-baseman-for-the-day Jerry Hairston - he Buckner'd it, leading to the first baserunner of the game. The no-hitter was then lost to the very next batter, Nick Markakis, who apparently picked out the vulnerable Hairston and lined a clean single past him.

The next barrier to fall was the shutout, which was lost in the eighth when Melvin Mora homered to left-center.

It's too bad. A perfect-game/no-hitter would have been a fantastic 'cherry on top' to a near Hall of Fame career. Do I think it would have happened? No. But I would've liked to have seen it lost on a clean single rather than an error.

However, it was still his best start of the year: Pettitte threw an astonishing 73 of 104 pitches for strikes and struck out eight with no walks.

As for the offensive side of the game, Nick Swisher was the hero. After slumping on the homestand, Swisher bounced back with a 3-4 game with a homer, double and single. 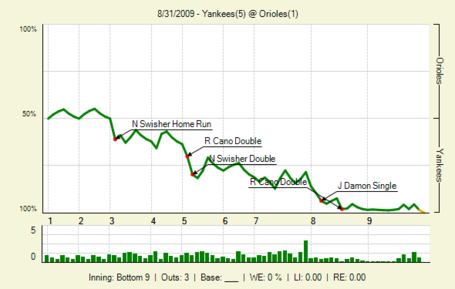