Share All sharing options for: Rally falls short in 10-9 loss

Where to begin... how about at the end?

Down 10-5 heading into the bottom of the ninth, the Yanks rallied valiantly for four runs, and just when it looked like they would tie the game, poor luck and poor execution doomed them.

Joe Girardi had Nick Swisher (try to) bunt with runners on first and second with no outs. If it was Melky up there, I would've been fine with it, but it was Nick Swisher, a guy with seven career sac hits. He chose a poor pitch to bunt and popped it up for out #1. Melky followed and lined what appeared to be a game-tying single up the middle, only for Elvis Andrus to field it and (barely) double-off pinch-runner Jerry Hairston at second. What a deflating way to end a game.

But ultimately, it wasn't the hitters that lost the game, but the pitchers, who gave up 10 runs. Joba disappointed again, setting a career high in earned runs with seven (over four innings). Chad Gaudin wasn't much better in relief, allowing three runs in 3.2 innings.

Joba experienced all his trouble with two outs. Texas scored in two innings off him, but each rally miraculously began with two outs and no one on base. He just could not record that third out in the second and fourth, ruining his night. 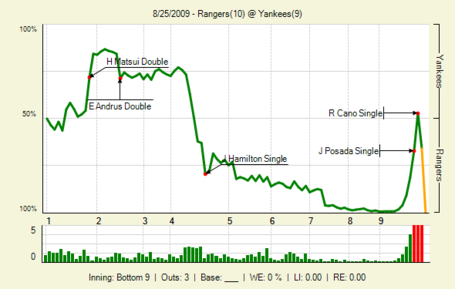