Have a laugh at this Red Sox article

Share All sharing options for: Have a laugh at this Red Sox article

From Deadspin (via BBTF) -

You'd think every baseball fan on Earth right now would be more or less numb to the idea of a player being outed as a roider. Ah, but once again, we find that Red Sox fans believe they and their team poop sunshine and live on some sort of magical, negro-free cloud in the heavens. Oh sure, they expect a team like the FACKIN' YANKEES to have roiders. But not the precious Red Sox! They're different! Special! They'd never violate the bond they have their legendary fans, who have been known to keep entire city grids powered simply with the strength of their hearts!

You listen to me, you ****ing retards. You're just another bunch of ***hole fans rooting for another ***hole team. And the fact that you think you're somehow above all that is what makes you utterly insufferable. I hope it turns out the Jason Varitek took HGH in 2004 and once killed a child in a drunken lawnmowing accident...

All through the [Boston Globe] article are testimonials from fans who suspected Ortiz was a juicer (because Boston fans are so perceptive, you see), but refused to believe it because they're all innocent little fawns at heart. I promise you the Simmons article on this next week will include this stand-alone paragraph:

"But not Papi. Papi was different."

He's not. He's just another ballplayer trying to get ahead. And Red Sox Nation is just another group of ****heads wearing pink hats. Keep crying those delicious tears, gang. 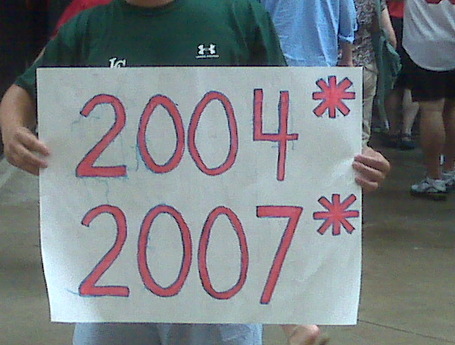 and having to sit next to insufferable Sox fans, I can say this article is pretty accurate.

May it lift your spirits on a tough night.