Share All sharing options for: CC locks it down late in 7-2 win

The game was looking eerily similar to last night's disappointing 3-0 loss, especially after Mark Teixeira grounded into a bases-full double-play on the first pitch he saw in the fourth inning. But the game quickly changed in the sixth, when the offense finally exploded, scoring five runs in the frame.

Perhaps the funniest moment of the season occurred right before the rally, when Melky Cabrera was hit by a pitch in the middle of the back (he wasn't hurt) - he turned away from the ball, and the catcher, Kurt Suzuki, thought the pitch had got past him so he turned to scamper after it. Melky sort of fell on him, and as Ken Singleton put it, "It looked like they were playing a game of Twister."

To the chagrin of many a Yankee fan, player and coach, A-Rod was hit in the elbow yet again. Sabathia came back in the bottom of the first and threw one behind Suzuki, prompting an early warning from the homeplate umpire. It was warranted. I have no problem with it; while I'm certain CC did what he did on purpose, Mazzaro may not have, but our pitchers still have to protect our best players.

CC had one of his most efficient games; in spite of four intentional balls, he threw 66 of 94 pitches for strikes (70%), and induced 12 groundouts and seven strikeouts in eight innings.

What can't be forgotten was the help the Yanks received from Oakland's awful defense. They committed four errors which led to two unearned runs. It seemed like every Oakland infielder was doing his best Bill Buckner impersonation. 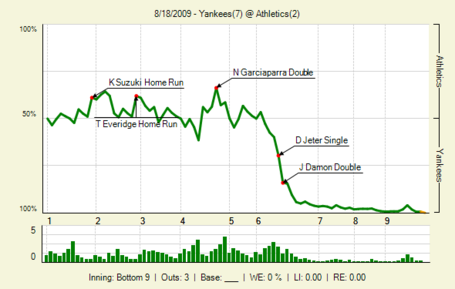 The Yankees are 4-2 on the road trip. I would have been content with 4-3 before it started, but am expecting 5-2 now. However, it is Chad Gaudin going tomorrow, who's had one good and one bad outing so far. Who will show up tonight?

PS: Joe Girardi said Damaso Marte might rejoin the team in Boston this weekend. I really don't know who would get sent down: Aceves, Mitre, Robertson?