Cano comes through in the clutch!

Share All sharing options for: Cano comes through in the clutch!

CYC made an impressive prediction in her Game Thread: "Who will be today's hero raising the helmet in Wednesday's afternoon delight?"

It was Robbie Cano, ending the game in the 11th inning with an RBI double, scoring Alex Rodriguez from second. Cano has been the un-clutchiest hitter in baseball this year, but we knew it had to change sometime - he's just too good of a hitter to continue to disappoint with runners on base.

Before his game-ending AB, A-Rod drew a clutch HBP, and Posada pushed him to second with a single (his only hit of the day). It's a good thing Cano won the game when he did, for who knows how A-Rod would have played 3B with a banged up arm.

The Yanks are now 12-0 when tied after the seventh inning (and that's without Joba pitching the magic eighth inning). The bullpen again did a great job, holding Toronto scoreless for the final five frames, thanks to Dave Robertson, Phil Hughes (just 16 pitches in 1.1 ip) and Chad Gaudin (in his first pinstriped action).

The Bombers have the best home record (41-18) and overall record in baseball.

This match was a good example of the significance of batting average vs. slugging percentage: Toronto had 14 hits (13 singles) and only three runs; the Yanks had seven hits (six for extra-bases) and scored four runs. Both sides went 1-8 with RISP.

What can't be forgotten is the double-play the Jays failed to turn way back in the first: if not for that, the game may have ended (in Toronto's favor) in nine innings.

On the other side, Posada's catching left a lot to be desired; one of Toronto's runs was due entirely to wild pitches. Though Burnett was credited/faulted with three wild pitches, two probably should've been blocked by Jorge. Maybe part of it is that he was catching a day game after a night game, but the fact that Burnett leads baseball in wild pitches is not solely his fault. 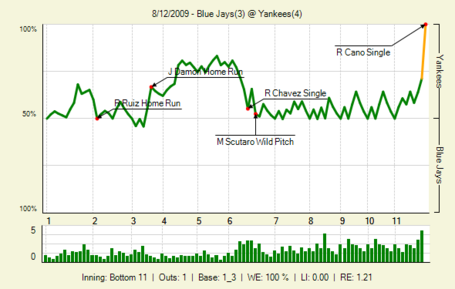 Derek Jeter was hit in the foot by a pitch in the first inning and was later removed from the game. Fortunately, x-rays were negative.

The Yanks now embark on a 10-game, 11-day road trip, beginning with seven on the West Coast and finishing with three in Boston.