I'll give the Yanks a mulligan on this one after the weekend sweep over the Red Sox. It was a close game that could've gone either way, but it happened to go Toronto's way tonight. Sergio Mitre may have made his last start as a Yankee after yet again failing to get past five innings (allowing five runs (three earned)).

The turning point probably occurred way back in the first, when the Yanks proverbially had Rzepczynski on the ropes (two runners on, none out, one run in), when A-Rod grounded into a double play.

Or it may have occurred three innings later when a tailor-made DP was screwed up by Mitre and Cano, turning a one on, two out situation into a two on, none out, one in situation. If a good throw had been made, the Jays probably don't score at all in that inning (instead of scoring three).

Perhaps we'll look back on this game as a blessing in disguise, as it may rid us of Sergio Mitre. It's clear that Alfredo Aceves (four shutout relief innings) can and should be starting games in Mitre's stead. 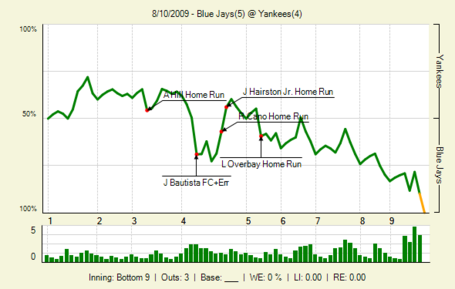 Will Chad Gaudin (or better yet, Al Aceves) make the start on Saturday?