Aceves to the rescue!

Share All sharing options for: Aceves to the rescue!

Game ball goes to Al Aceves, who worked four shutout innings (with one hit, no walks and five strikeouts). Is he now the front-runner for Thursday's start? Girardi said flatly that Hughes won't get the start, so it looks to be Aceves or Scranton's Sergio Mitre.

Joba certainly wasn't good. Neither was Ransom. Hinske still hasn't had an AB, and may not until the Yanks face a righty (which won't happen until Tuesday).

The offensive heroes were Jeter, Matsui and Posada, who combined to go 10-14 with nine RBI. 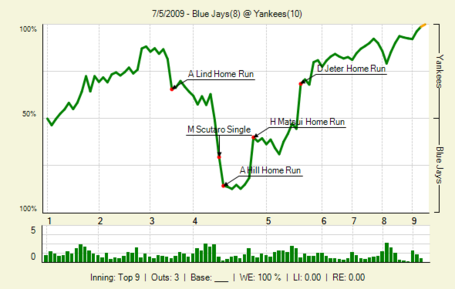 Pettitte goes for the sweep against highly-touted rookie Ricky Romero tomorrow at 1 p.m.

PS: Three Bombers made the All-Star team: Jeter and Tex will start, and Mo may very well close out the game.