Share All sharing options for: Offense and Burnett carry Yankees to 11-4 win

It's hard to believe James Shields is as good as he is after watching tonight's game. He has basically two pitches: an average 88-90 MPH fastball and a good splitter (with solid command). But the Yanks began to tattoo him when they realized, to get ahead, he would groove a first-pitch fastball. Matsui and Posada singled and doubled (respectively) on consecutive first pitches, giving the Yanks a lead they would never relinquish.

A.J. Burnett shut down Tampa's hitters, allowing just one (unearned) run in seven innings on four baserunners. But he actually wasn't that great (featuring an inconsistent curveball and a fastball that averaged 'only' 93 MPH (slow-ish for him)) and was lucky to face a Tampa team in the midst of an offensive slump. This is not a knock on him, but a warning to upcoming opponents: how good can Burnett be when he is on? Teams should be very scared of that. 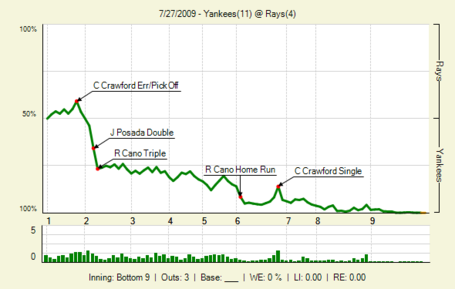