Share All sharing options for: 8-3 win makes it eight straight

Joba Chamberlain had one of his best starts of the year, going seven innings with six Ks and only five baserunners. He was efficient, throwing 100 pitches, including just 26 in his last three frames. His fastball averaged 93 MPH, and he topped out at 96.

Derek Jeter and Melky Cabrera had three hits apiece. The only hitless Yankees were Matsui and Swisher, though they drew one and two walks, respectively.

It looked as though Brett Anderson might pitch a perfect game through the first two innings, as he struck out four with only 26 pitches. It was a seemingly innocent infield single by Robbie Cano that started a two-run rally. The big hit came two batters later when Melky lined a double down the left-field line. Jeter followed that up with a Jeterian single to right, accounting for the Yanks first run.

It was still a fairly close game until the eighth, when the Yanks tacked on four more, beginning with a Jorge Posada homer and assisted by a Santiago Casilla throwing error.

Phil Coke was impressive in one perfect inning, striking out two with just 13 pitches. Yankee pitchers were able to bear down when Athletics got into scoring position, not allowing a hit in six AB. 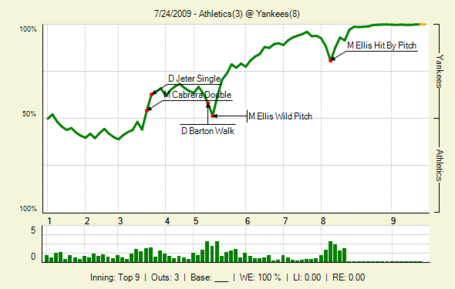