Alone in first as 6-4 win makes it five straight

Share All sharing options for: Alone in first as 6-4 win makes it five straight

With another Red Sox loss (4-2 to Texas), the Yankees have vaulted into first place for the first time since June 8th.

We should be happy with Sergio Mitre's performance tonight; 5.2 ip, 3 er is more than good from a spot starter. It looked like it might get ugly early, as Mitre allowed hits to the the first two batters, but Baltimore only scored one that frame.

The offensive heroes were Baltimore's pitchers. The Yanks scored six runs on only six hits because of eight walks.

The first walk was issued to A-Rod, who proceeded to steal second, and came around to score on consecutive sac flies. In the next inning, he gave the Yanks the lead for good with a big two-out, two-run single.

Even Robbie Cano walked; he also went 2-3 with a game-breaking two-run homer in the fourth.

It was tough watching Derek Jeter slide head first into home and then get up limping. But he made a great running catch to end the game in shallow left-field which made me think the leg is fine.

Because of a lucky/great stab by Teixeira, Phil Hughes did not have to enter the game, meaning he could probably go two tomorrow if needed. 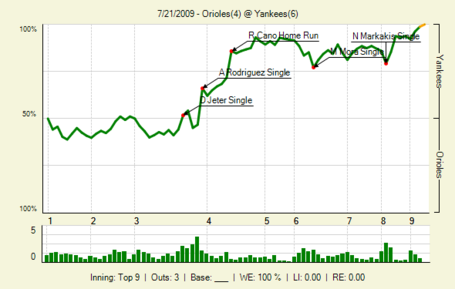