Pitching and defense: Another 2-1 win

Share All sharing options for: Pitching and defense: Another 2-1 win

You might say Hideki Matsui was the hero of tonight's game, but that wouldn't be so. That honor goes to Andy Pettitte, who continued his domination of the O's by holding them to one run in 7.1 innings (and that run came way back in the first). He matched his season high for innings and broke his season high for Ks with eight.

Behind Andy, the defense turned two double plays and made several more fine plays that saved runs. In the second,

In the eighth, with the score tied at one and the infield back with a runner on third, Mark Teixeira scooped a grounder and fired home, barely getting the speedy Cesar Izturis. In the very next AB, Phil Coke threw a 55-footer and the runner was coming home to score, but Molina pounced on the ball and threw to Coke who was covering the plate, again just barely getting Brian Roberts. Sure Coke shouldn't have thrown the wild pitch in the first place, but he should get credit for getting to homeplate quickly. Too often do pitchers get to home just a tad late to nail the runner.

"Pick me out a winner." Matsui's game-winning homer was like something out of The Natural. He broke his bat on a 2-0 foul, got a new bat, and three pitches later launched the capper in the bottom of the ninth. 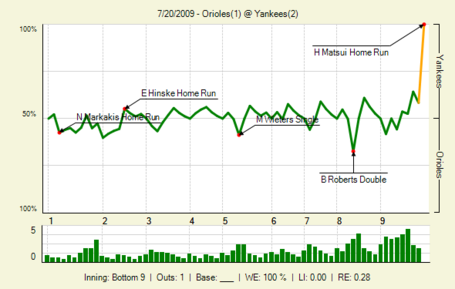 Two hours and 34 minutes - brilliant! The only other run came on Eric Hinske's fourth Yankee homer (in only five games).

As I write this, John Smoltz is unraveling down in Texas as the Rangers lead the Red Sox 6-2 in the sixth. If the score holds up, we'll have another first-place tie.