I attended my second Trenton Thunder game of the season tonight, but the first since Jesus Montero was promoted to the team. He went 1-3 with two walks, but oh what a 'one' it was: a seventh inning, game-tying grand-slam on a full count with two outs. He seemed to be looking fastball and got one, hammering it to left-center field.

I've been to about 15 Thunder games in my life, and have seen maybe three homers hit in all that time. There's just something about that ballpark that kills fly-balls, but it wasn't enough to stop Jesus tonight.

The best term to describe him physically is 'man-child'. He's still a teenager but looked bigger than any player on either team.

As for his defense: it was extremely hit and miss. He allowed two passed balls (one with a runner on third), though one was technically scored a 'wild pitch'. On the first one, he had trouble locating the ball, finally found it but made a mediocre throw to first that short-hopped the first-baseman - the runner looked out but was called safe. A few other times he blocked balls in the dirt. 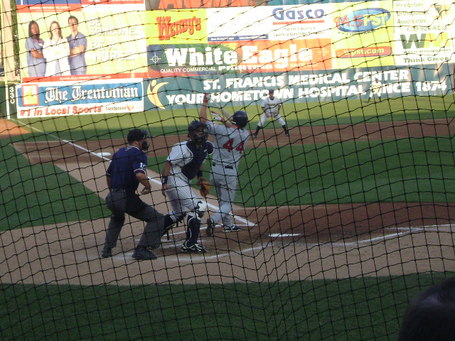 He later threw a dart to second trying to nail a baserunner who was taking a big lead, nearly catching him as he dove back to second. His 'game calling' ability seemed fine as he framed a number of borderline pitches throughout the game, getting a call here and there. For as bad as he supposedly is behind the plate, Trenton pitchers struck out 15 in the game.