The Evil Empire's New Clothes: The Joba Debate (No, not that one. A different one.)

Share All sharing options for: The Evil Empire's New Clothes: The Joba Debate (No, not that one. A different one.)

While my participation in fantasy sports was born sometime in the last decade, in retrospect I think I’ve been subscribing to the concept and principles of fantasy as early as age 10.

Once a year. November 1. The Candy Draft.

The day after Halloween, my sisters and I would convene to build our fantasy sugar rosters, and being the oldest and most ridiculous, I took it too seriously. I’d manage to deal my Necco wafers for Snickers, Raisonettes for Peanut Butter Cups.

And my first round pick, the Carl Crawford of junk food, was always my KitKats. There was nothing I could be offered in exchange for them.

My sisters, being younger and normal, would commence eating their candy as soon as they could, but I wanted to keep trade talks alive for days, sometimes weeks. The result of this? I held onto my KitKats for so long and refused to move them, to the point where they were either melted or covered in stale powder.

Then they were about as useful to me as Necco wafers.

With the trade deadline coming up, hypotheticals over how far would you go and how much would you sacrifice, have blanketed the Yankee universe—a thick surround-sound of murmured accord and indignant disapprovals.

After weeks of observing it, I’m no more enlightened than I was before about why in God’s name is Joba seen as the KitKats of MLB, the immoveable keeper resolutely insulated from every budding trade theory. They may as well be placed in one of those children's divider plates. 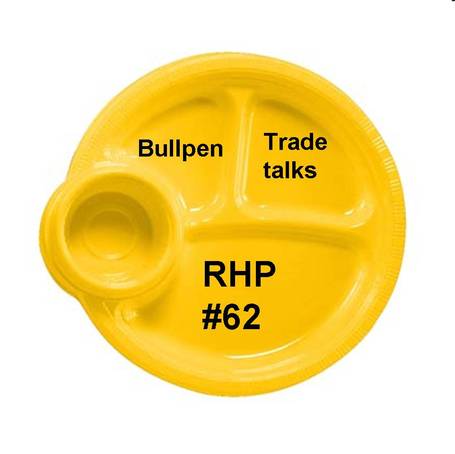 Ironically, the Yankees’ mentality seems to mimic that of a gourmet chef making risotto, terrified of letting it sit still for a second for fear of it crusting and becoming ruined. They’ve moved the young pitcher around so much, it’s amazing he hasn’t developed some kind of bipolar disorder.

The idea of trading Joba makes everyone shudder. WHY? Why do you want him so badly? While admittedly stunning back in the good old days of setup relief, he’s essentially useless as a starter and may as well be Esteban Loiaza at this point.

New York Sports Jerk does a great job of boiling down the abortive plights of poor Joba, and I’m struggling to see how this macabre laundry list of failures is categorically ignored when the topic of trade comes up.

The standard argument used by people who have dug in on that side of the Joba debate is that you'd rather have him throw 200 innings than the 80 he'd get out of the bullpen.

Of course, it's impossible to get to 200 innings if you can't get through the fifth half the time, but why cloud the issue with factual matters like that?

Let's take a look at the numbers from Joba's last 7 starts:

For a frame of reference, there are only 28 hitters in the American League with an OPS of .861 or higher, and only 26 players in all of baseball with an average of at least .311. In other words, Joba is turning every hitter he faces into one of the best players in the league.

The Joba Debate has been going on for more than a year, and given the current circumstances, the opposing sides should no longer be bullpen vs starter, but rather healthy vs hurt.

And anyone who looks at Joba’s pitching cannot in good conscience have the audacity to claim this guy’s arm isn’t in trouble. He went from have a ruthless fastball-slider combo, to having to work another 2 pitches into his arsenal. His fastball is 10 runs below average from last year. A slider that was so effective that connecting with it was like trying to drive a nail into a tomato seed, is now met with ease and comfort. Batters face him like they're looking at long-division quiz they failed in third grade, and now get a good chuckle over how unconquerable it used to seem.

Throwing overhand is against the body’s natural movement, which makes time off crucial for pitchers. The wind-up is complex, stressful, and violent, and unless a pitcher’s muscular composition is stable enough to prevent subluxation, the risk of strains is going to balloon with every start.

A study done by sports medicine researchers at found that professional pitchers have significantly decreased range of motion in their throwing elbows:

The researchers reported on a study of 33 professional baseball pitchers in the October issue of the American Journal of Sports Medicine. Trainers and team doctors measured the pitchers' ability to bend, straighten and rotate their elbows and found that range of motion in the dominant elbow was limited when compared to the other arm.

Pitchers get hurt if they sneeze too bruskly. Now all of a sudden the unassailable dilution in Joba's arsenal is irrelevant and an aggravating underlying injury is preposterous? History doesn't offer us a whole lot in terms of evidentiary pool for relievers-starters, and a good reason for this may be the expedited exit from baseball's radar not long after this move. Take, for example, the drop-offs of these players after they put their relief life on the shelf: (from Baseball-Reference.com) 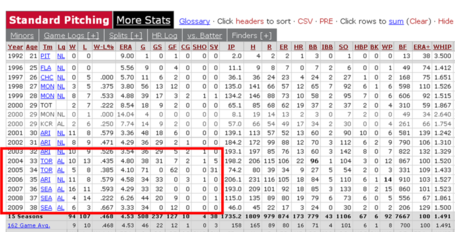 Isn’t it possible that despite a college career as a starter, that Joba’s muscles may have taken a hit when his routine was abruptly altered? And isn’t it also possible that the Yankees have done some investigation of their own into this possibility?

And if they did discover something was amiss with his arm or shoulder, wouldn’t is stand to reason that such information wouldn’t be the type of thing they’d want public right around the trade deadline? I mean, hell, every fan is apparently convinced he’s priceless and the roster would be devastated without him, DESPITE the fact he hasn’t done a single worthwhile thing for the team in about 122 years. MAYBE this same faith and enduring wait-and-see attitude prevails in the league, as well, and is just as exploitable as Ks are leveragable.

Of course, it’s natural to suffer a degree of transitional wear and tear when moved from the pen to the rotation. No one expected his velocity to stay up, but we DID expect his value to stay put. After all, wasn’t that the whole reason he became a starter in the first place? Because he’d be more of an asset to the team this way rather than limiting his dominant stuff to only 1 inning?

Yeah. He’s been indispensable. Without him, our relievers and their ever-amorphous caliber of talent would never see the light of the fifth inning.

Bill James, the master of all statistical significance himself, said:

"IT’S NECESSARY TO LIMIT THE RELIEF PITCHER’S ROLE, TO PREVENT RELIEVERS FROM BEING DESTROYED BY OVERWORK."

"A HUNDRED RUNS SAVED BY A RELIEF ACE HAVE SUBSTANTIALLY MORE IMPACT THAN 100 RUNS SAVED BY A STARTING PITCHER, IN ALL CASES, EVEN IF THE RELIEVER’S JOB IS JUST TO COME IN AND PITCH WHEN THE STARTER GETS KNOCKED OUT."

So continue to argue that he was a starter in college. That he’s young. That we had to expect a bit of a learning curve. That we shouldn’t automatically abandon someone who was brilliant for us just a year ago. That he's not really all that bad for a first year starter.. (cough..Ricky Romero...cough)

Why are we grasping onto the Joba-is-good myth like it’s our lucky hat being worn in a convertible going 80 on the thruway? I can almost get on board with why the hat would be worn in the first place, but once you realize the liability involved, why not either put the top up or take off the hat?

And why can't Wang get in on this de facto no-trade invincibility? I don't need to go into the amount of tangible damage Wang's forced use has inflicted upon the Yanks and their record. He was, indeed, amazing at at time, but it's unreasonable to expect this brilliance to be unequivocally restored. The only thing the Yankees can do is contain the fire by best determining both pitchers' realistic possibilities of recovery.

Why don’t we want to trade him? What is he bringing to the rotation that can’t be achieved by letting Swisher go five innings instead? Joba's not the last young pitcher to come along, and with Phil Hughes/Alfredo Aceves demonstrating discernibly developing power in their respective roles, relinquishing Joba isn't going to hurt the Yanks' young pitching pool by a long shot. If anything, it strengthens it. Just imagine how much more formidable they become with a reliable starter ahead of them that can go beyond 5 innings.

The Yankees’ former ace-turned-joker is hurt. In basest terms, the only thing Joba has working for him--because it sure as hell isn't his fastball--is his youth and his past. Neither asset is compelling or absolute enough to grant him the kind of trade immunity that's currently being heaped on him in droves. And if some other team wants to tackle the gamble of whether he’ll rebound like Wang or like A-Rod, let them have it.

Joba Chamberlain, unfortunately, is reaching stale KitKat status. Deal him for Twizzlers. Pending a "Go-Go-Gadget, velocity!" turnaround within the next month, Joba marinates in the fan's worst fear, that indeed, he is simply damaged goods.